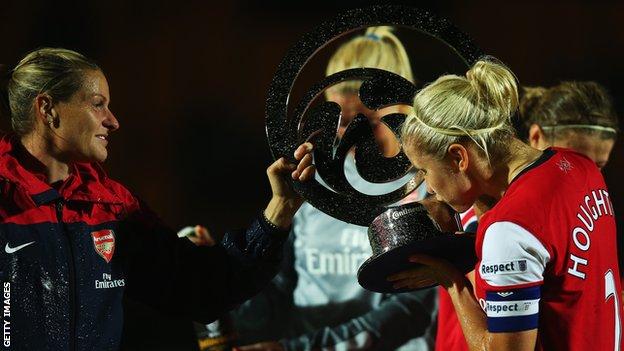 A tight game was expected at Barnet's Hive, but the Gunners were dominant from the outset as they secured a domestic cup double.

Winger White broke the deadlock on 76 minutes and midfielder Little wrapped up the win four minutes from time.

Victory gave Arsenal some consolation after Liverpool won the league.

The Gunners had won nine successive league titles but only finished third this season, with the Merseysiders holding off Bristol Academy at the top.

Beating Lincoln brought the club a 40th trophy in 21 years, though, and manager Shelley Kerr said: "That's a great way to finish the season.

"We had to be patient because, credit to Lincoln, they were so well organised and I was getting a few grey hairs waiting for us to score.

"But I was confident we would win the game. We knew we would have to be patient and in the end the girls got what they deserved."

Kerr, at the end of her first season in charge, added: "That's two of the three domestic trophies we've won and we reached the semi-finals of the Champions League, so it's not been a bad campaign."

Lincoln counterpart Rick Passmoor said: "Arsenal were the better team. They're full of internationals and used to playing on this stage, unlike most of our girls. But I was proud of their efforts."

White then headed narrowly over the bar from left-winger Rachel Yankey's cross as they kept up the pressure.

Lincoln were being penned back inside their own half, with both White and Yankey sending in long-range efforts without troubling Bardsley.

But the Imps almost took the lead in the 43rd minute, former Arsenal midfielder Bonnie Horwood having a low shot deflected just past the post.

What is the Continental Cup?

The Continental Cup, named for sponsorship reasons, features the eight Women's Super League sides. Two groups of four compete in a round robin before the top two progress to knockout semi-finals and then a final

They were soon on the back foot again, though, and in first-half stoppage time it took two goalline blocks to deny Carter following Yankey's corner.

The opening goal should have arrived six minutes after the break but White, from Little's low cross, shot wide from six yards.

Lincoln's defence then survived another scare as Carter and Yankey, in the same attack, had shots cleared off the line.

But the Imps defence was finally breached when Little slipped a through-ball in for White to shoot home from 15 yards.

And Little, the night's outstanding player, struck the clincher with a 12-yard shot into the corner of the net.

Kerr added: "Kim really delivered and I was delighted she got her goal.

"I was pleased for Ellen, too - she was relieved to score after missing a couple of earlier chances."

Defeat left Lincoln, who are to be renamed Notts County next month, still seeking their first major trophy.