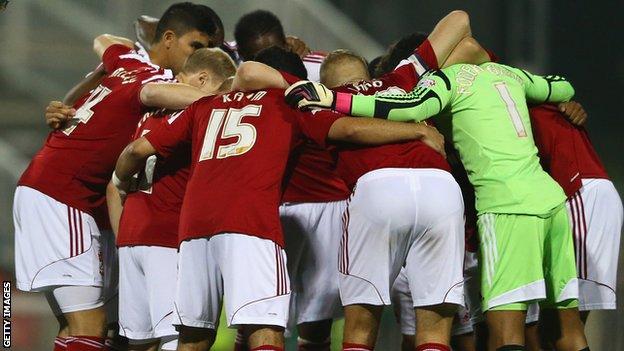 Swindon have written to the Football League to ask referees to protect their players from over-aggressive opponents.

Chairman Jed McCrory fears his team are being "bullied" while trying to instil their own style of play, which he describes as "pleasing on the eye".

"We feel that opposition players approach us with a more physical game that we believe oversteps the mark," said McCrory.

"We feel that officials should be stepping in to protect our players."

A spokesman for the Football League told BBC Wiltshire they will pass comment once they have reviewed the letter.

McCrory has urged the authorities to review two examples from this season, including a tackle from behind made by former Town defender Aden Flint on Nicky Ajose in Swindon's 3-2 win last month, for which Flint received a yellow card.

McCrory also cited tackles by Kevin Davies on Nathan Thompson and Grant Hall during their most recent fixture against Preston.

The letter reads: "We believe that these types of tackles have no place in the game yet they continue to go unpunished, which leaves other sides to think that this is acceptable."

Mark Cooper's Swindon have 22 yellow cards and one sending off against their name this season and McCrory says most of them have come for verbal dissent by players frustrated with refereeing decisions.