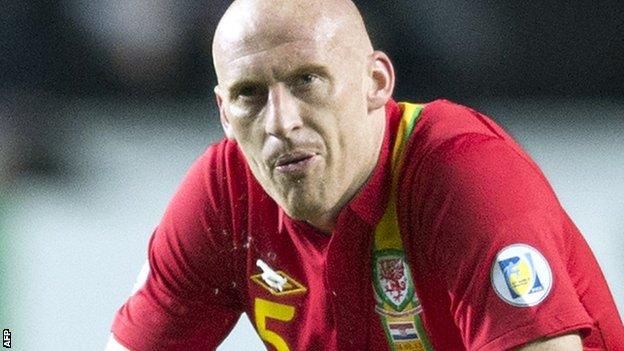 Manager Chris Coleman says James Collins "got it wrong" by denying that he had refused to turn up for Wales.

Collins contradicted Coleman's claim the West Ham defender had turned down the chance to join the squad as a late call-up prior to September's game against Serbia.

The centre-back has not been included in the squad for World Cup qualifiers with Macedonia and Belgium in October.

"I was disappointed and I think James got it wrong," Coleman said.

Coleman claims he invited Collins to join the squad for the qualifier against Serbia after suspension and injury had ruled out defenders Ashley Williams and Sam Ricketts.

Collins denied Coleman's suggestion that he refused to play for his country, but the Wales manager is sticking to his version of events.

"What happened is exactly what I said - I'm not going to make something like that up," Coleman added.

"I've known James a long time and he's a good boy. [I've got] no problem with him personally I just think on this instance he got it wrong.

"James was upset and that's alright but there's a way of dealing with things and a way of doing things and I just think he got that wrong.

Although Collins has been left out of the World Cup qualifiers against Macedonia and Belgium, Coleman said it did not signal the end of his international career.

But Coleman added it was up to the former Aston Villa and Cardiff City to make contact with him.

"I'm not going to close the door on James or anybody else. It's for James to come and see me," Coleman added.

"That's not a conversation we're going to have over the phone and it's not going to be a five minute one.

"It has to be a sit down for me, man to man and let's have a conversation.

"He can tell me what he thinks and I'll be telling him what I think.

"If we can go forward after that, then great. I never say never and I never shut the door on anybody.

"We haven't got enough players to do that but where do you draw the line? I don't think we can accept that.

"I've got my principles and I'm not going to change them."