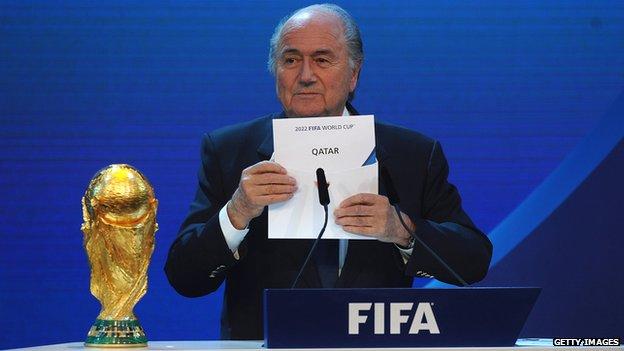 However carefully crafted the world governing body's statement is on Friday, there appears to be an unstoppable momentum behind the controversial switch despite the mayhem it will cause to the international football calendar and all the associated commercial and media contracts.

As things stand, the most likely outcome is a three to six-month consultation process that will look at the best - or least inconvenient - dates during which to play the tournament.

But even if the question of playing in Qatar's sweltering summer heat is resolved, the bigger questions about the tiny Gulf state's suitability to host it won't go away.

In the last two weeks, a brilliant investigation by the Guardian has unearthed shocking allegations of mistreatment of Nepalese migrant workers in Qatar.

According to documents held by the Nepalese embassy in Doha, 44 workers died on construction sites in Qatar between 4 June and 8 August.

More than half died from heart attacks, heart failure or workplace accidents, the paper reported.

Uefa president Michel Platini is right to state that this issue is of far deeper significance than the ongoing debate about when the World Cup should be played.

For once, Fifa president Sepp Blatter seems to agree with him. On the eve of Friday's talks on Qatar, Fifa officials were briefing that the "slave labour" scandal had eclipsed the row over scheduling.

Still, some may think Blatter is using the migrant labour row to delay a final decision and to deflect attention from the mess his executive committee created back in December 2010, when it voted 14-8 to give the World Cup to Qatar.

Even now, Fifa's own chief investigator, Michael Garcia, is looking into the circumstances surrounding votes for the 2018 and 2022 finals.

Over the next few weeks, the American lawyer will visit all the bidding nations to gather fresh evidence.

Following Blatter's own admission that there was "political interference" during the vote, there has been speculation that this will be the focus of Garcia's investigation.

Although there have been reports that Platini was lobbied to vote for Qatar by the then French president Nicolas Sarkozy, proving a significant number of Fifa's executives acted under political pressure may be too much, even for a smart New Yorker like Garcia.

Besides, this was hardly the first World Cup vote where wider political and economic considerations were believed to have been at play. Heads of state regularly lobby Fifa members during bidding contests.

But Garcia's report, due to be delivered to the Fifa executive committee next year, may yet provide the ammunition for those officials who want to go further than simply moving the timing of the Qatar World Cup.

Until Garcia's findings are made public, though, Fifa must continue to look at the feasibility of switching the tournament to the northern hemisphere winter.

It is still hard to believe Fifa's executives could so wilfully disregard their organisation's own evaluation report on each of the bidding nations - Australia, Japan, Qatar, South Korea and the United States - for the 2022 World Cup.

Here's what it said on Qatar:

"The fact that the competition is planned in June/July, the two hottest months of the year in this region, has to be considered as a potential health risk for players, officials, the Fifa family and spectators, and requires precautions to be taken."

Harold Mayne Nichols, the former head of Chilean football who wrote that report, said this week that only one member of the executive committee asked him about the heat before the vote.

"You heard a lot of rumours that people had taken their decisions (already) and it wouldn't matter what the report says," he told the Associated Press.

Almost three years on from the decision to award the World Cup to Qatar, questions and concerns just keep on growing.

However, one thing is already clear: Whenever or wherever the 2022 World Cup is played, Fifa's reputation and competence has once again been placed under the microscope.