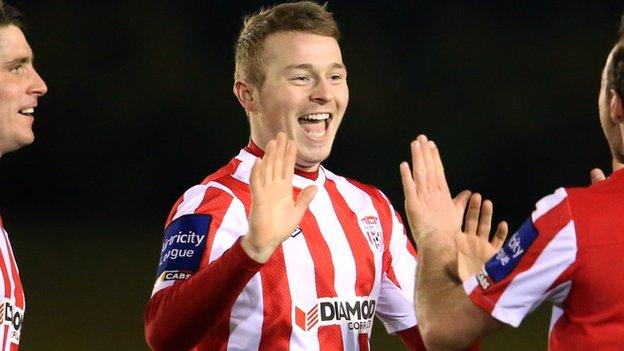 Derry City maintained their push for European qualification with a facile win over a hapless Shelbourne.

Rory Patterson's third-minute penalty and a Michael Rafter strike on 12 minutes put the Candystripes in charge.

Dean Kelly pulled one back for Shels after 34 but Rafter's second of the game two minutes later was enough to seal the points for the home side.

Shelbourne had Brian Gannon sent off 16 minutes from time as Derry moved back to fourth position in the table.

The hosts were ahead after only two minutes when Adam O'Connor was adjudged to have fouled Patterson in the area, who picked himself up to coolly slot his penalty low to Lee Murphy's left for his 24th goal of the season.

Derry extended their advantage in controversial circumstances when Paul Andrews appeared to slip to allow Rafter a clear run on goal to roll the ball under the onrushing Murphy.

Shelbourne were fuming and, despite their vociferous appeals that Rafter had fouled Andrews, referee Tomas Connolly waved away their protests and cautioned Andrews as the goal stood.

The visitors found a way back in the 35th minute when Murphy launched the ball up-field and, after letting the ball bounce, Kelly lifted a brilliant lob over the stranded Gerard Doherty.

That hope disappeared within two minutes when Simon Madden's cross was headed back across goal by Barry McNamee for Rafter to glance a fine header just inside the post.

Gannon was dismissed for a second yellow with 15 minutes remaining before the substituted Robert Bayly was bizarrely sent off from his own bench after a furious exchange with the fourth official.

Derry next host Shamrock Rovers on 12 October in a game which could prove critical in their quest for Europe, but will have one eye keenly on Sunday's FAI Cup semi-finals which could have as much of a bearing on qualification.

Sligo Rovers or Dundalk must win the FAI Cup if the fourth-placed team in the Premier Division is to qualify for Europe.