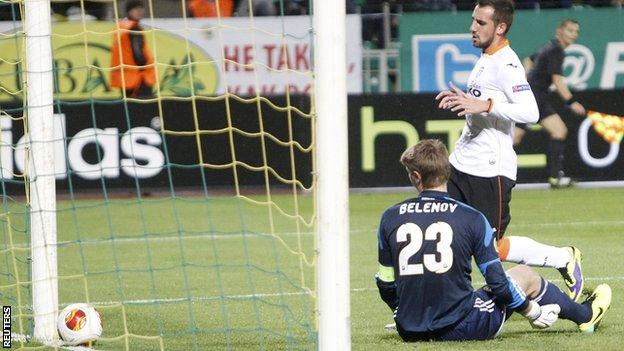 Valencia put their Europa League campaign back on track with a 2-0 win over Kuban Krasnodar in Russia.

Fiorentina moved clear at the top of Group E with a 2-1 win at FC Dnipro after a winner from Massimo Ambrosini.

Fellow Italian side Lazio drew 3-3 at Trabzonspor after two goals in a minute late in the game from Sergio Floccari.

Los Che reached the Champions League final in 2000 and 2001 but lost on both occasions.

The two sides lead Group J, a point clear of Cypriot side Apollon Limassol, who beat Legia Warsaw 1-0 in Poland.

Russian side Rubin Kazan, in the same group as Wigan, who beat Maribor 3-1, made it nine goals in two games as they beat Belgium's Zulte Waregem 4-0.

Other British representatives Tottenham Hotspur, who won 2-0 at Anzhi Makhachkala, are four points clear at the top of Group K after Tromso drew 1-1 with Sheriff Tiraspol.

In Group G, Rapid Vienna were grateful for added time from English referee Mike Dean as Christopher Trimmel headed a 94th-minute equaliser in a 2-2 draw at home to Dynamo Kiev. Belgian club Genk lead the group after beating Swiss side FC Thun 2-1.

Bulgaria's Ludogrets are the surprise leaders of Group B after beating Dinamo Zagreb 3-0, but the match was marred when 45 away fans were arrested for violence.

Brazilian Alan scored twice as Salzburg kept up their 100% record with a 2-1 win over Danish club Esbjerg in Group C.

Eintracht Frankfurt have also made a perfect start after a 3-0 over Apoel Nicosia in Cyprus while, also in Group F, Bordeaux were surprisingly beaten 2-1 at home by Israeli side Maccabi Tel Aviv.

Sevilla lead Group H after beating Freiburg 2-0, while French side Lyon, who failed to make the Champions League group stages for the first time since 2002, were held 1-1 at home by Group I leaders Vitoria Guimaraes.

Greek side PAOK Salonika and AZ Alkmaar both have four points at the top of Group L after they drew 1-1 in the Netherlands.