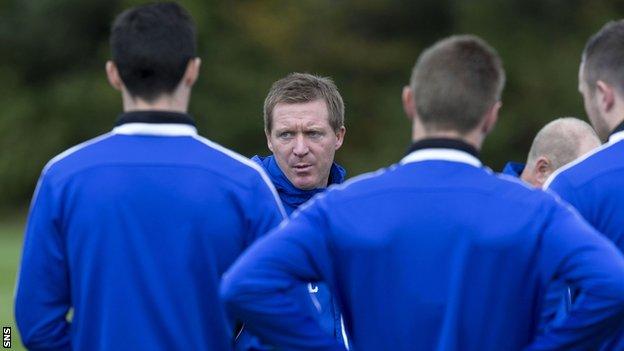 Hearts boss Gary Locke believes a win for the Scottish Premiership's bottom side against St Mirren would be "huge".

They Tynecastle outfit started the season with a 15-point deduction after the club entered administration.

But Locke's men have gained eight points from eight games while the Buddies have picked up only two so far.

"They have not got off to the best of starts but they are a good side and we know how difficult it's going to be," said Locke ahead of Saturday's meeting.

"They're all big games. Since the season started, every game's a cup final for us because of the situation we're in.

"Obviously, St Mirren are the team above us but we're going into this game no differently than any other.

"It's a home game, obviously we've got to try and win it but it's just as important as the next five or six games coming up.

"Psychologically it would be a huge win but we watched them the other night [in the 1-1 draw with Aberdeen] and, once they got a goal ahead, they looked as if their confidence was coming back.

"We are not going to avoid relegation after eight or nine games.

"We have 38 games to eat into the points deduction and that's what we aim to do."

St Mirren manager Danny Lennon has been under pressure with the Paisley side yet to win in all competitions so far this season.

"A lot of the criticism Danny's been getting is very unfair," said Locke.

"For me, I think he's done a great job. He's won them a trophy against ourselves last year [in the Scottish League Cup final].

"He's kept St Mirren in the league, which I think is a fantastic achievement. So, I think it's very harsh."

Third-bottom Kilmarnock, who are on three points, are also still searching for their first victory but Locke insists Hearts' main priority must be to eliminate their remaining deficit of seven points.

"I don't like to set too many targets," he added.

"I've said all along zero points is the aim; get to zero points and then we'll have a look at the teams above us. Hopefully they'll be within touching distance."