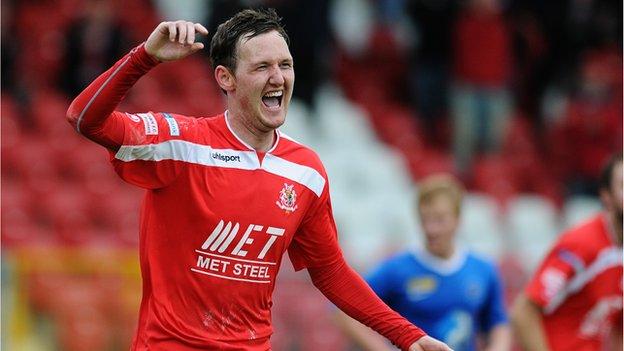 Irish Premiership leaders Portadown have received a boost ahead of their game against Warrenpoint as Gary Twigg has been named player of the month.

The striker was selected by the Northern Ireland Football Writers after scoring seven goals during September.

Twigg hit a hat-trick against Ballinamallard United, and also found the back of the net against Dungannon Swifts, Crusaders and Glentoran.

The Ports enjoy a one-point advantage over mid-Ulster rivals Glenavon and Linfield at the top of the table ahead of the weekend fixtures.

"It's going to be a tight race for the league title but hopefully we'll be right up there at the end of the season," said Twigg.

"Warrenpoint are bottom at the moment but last week they beat Ballymena, who are the only team to beat us so far in the campaign. It's a cliche but there are no easy games in this league.

Michael Hammond and Liam Beckett will watch the north Belfast derby between Cliftonville and Crusaders at Seaview.

Grant Cameron and Lee Doherty will be at Mourneview Park where second-placed Glenavon host third-placed Linfield.

The programme will also feature news of the other three top-flight games, plus reflection on Friday night's action and the rest of the day's sporting news.

"We've been unfortunate with some injuries already, but we'll just deal with any more problems down the line if they come along."

The Scot grabbed a trio of goals in the incredible 11-0 thumping of Ballinamallard during September.

"That is a result I've never been involved with before and probably never will be again, but it was nice to get a hat-trick.

"I know the history of the club and some of the strikers who have become legendary at Shamrock Park - hopefully I can go on to make an impact on a par with some of those."

Warrenpoint manager Barry Gray must plan without defender Liam Bagnall, who is unavailable for the game at Stangmore Park

The Ports are set to be without the versatile Sean Mackle for a number of weeks after he damaged medial ligaments in a reserve team game on Tuesday night.

Second-placed Glenavon have Marc Brown sidelined with an ankle injury for their home game with third-placed Linfield but Ciaran Martyn is set to return to Gary Hamilton's squad.

The only Linfield player on the treatment table is Ross Clarke, who is still recovering from a broken toe. Brian McCaul has recovered from a knee knock.

Cliftonville entertain Crusaders in the first north Belfast derby of the season, but the Reds will be without Eamonn Seydak with a foot problem, while defender Marc Smyth is struggling with a knee complaint.

Jaimie McGovern is set to be included in the squad after being stretchered off against Dungannon Swifts, and also Ryan Catney, while Nathan Hanley remains the Crues' only injury absentee.

Glentoran will be without David Howland for a number of weeks and are also minus Aaron Boyd (hamstring) and Jason Hill (shin), while Calum Birney is out suspended after being sent-off in the closing stages of last week's defeat by Portadown.

Dungannon travel to the Oval without PJ Lavery, who has GAA commitments, while Adam McMinn (hamstring) and Johnny Topley and Andrew Burns (knee injuries) are also missing for the Swifts.