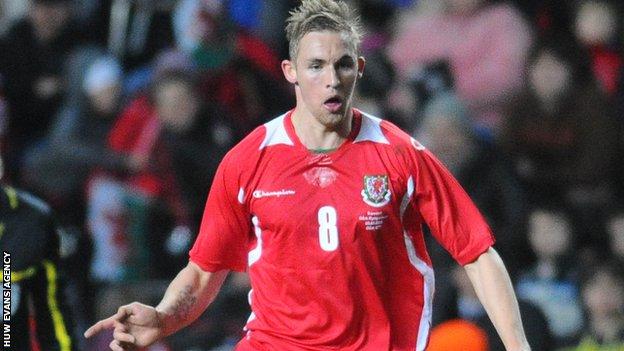 Jack Collison says he has moved to Bournemouth on a month's loan in a bid to play regular football.

The Wales and West Ham midfielder left the Hammers in the Premier League for Bournemouth in the Championship on 1 October.

Collison, 25, has hardly featured for West Ham and has been sidelined for most of this Premier League campaign.

"It has been frustrating part of the season for me," said Collison, who has won 16 Wales caps.

"I wasn't getting much game time at West Ham, other than in the Carling Cup, and the opportunity was there.

"I had the choice of sitting on my bum and not playing much football at West Ham or play football for a good side in the Championship. It was a no-brainer really."

He has been named in manager Chris Coleman's Wales squad to face Macedonia in a World Cup qualifier in Cardiff on 11 October and then play in Belgium four days later.

Collison has made five appearances for club and country this season and 21 last term after a seven-month lay-off with a knee injury.

He fought his way back into the Wales reckoning after coming back from a serious knee injury and Collison admits he wants to play regularly after being sidelined for so long.

He made his debut for Bournemouth in the 2-1 defeat to Leeds United at Elland Road on Tuesday night.

"I have experienced a lot of injuries and while I am fit I will try and play as much as I can," said Collison.

"It was all a bit of a whirlwind to be honest.

"I found out about the opportunity to go and I left the West Ham training ground Tuesday, arrived in Leeds at 5.50pm and at 7.45 we were kicking off against Leeds United.

Collison played in Wales' 2-1 defeat to Macedonia in September and admits he is trying to cement his position in the Wales side.

"I am trying to make up for lost time with the Welsh team," said Collison.

"It's a fantastic group of players and we thought we were a little bit hard done by when we came back from Macedonia without anything.

"On Friday night we want to get that right and get three points on the board and put in a good performance."