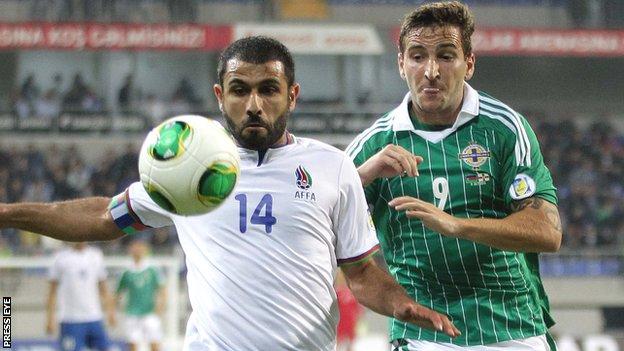 Michael O'Neill's side lost to Luxembourg in September but dominated the first half in Baku.

However, Rufat Dadasov fired in and, though Martin Paterson hit a post, Mahir Shukorov scored a free-kick after Jonny Evans saw red for kicking out.

The loss means Northern Ireland slip behind Azerbaijan to fifth in their World Cup qualifying group.

O'Neill opted for a new-look 3-5-2 formation as Northern Ireland attempted to bounce back from the humiliating 3-2 defeat by Luxembourg.

The visitors controlled the first half in the Bakcell Arena, but failed to secure a deserved lead.

Azerbaijan keeper Kamran Agayev kept out a powerful Chris Brunt strike before producing a superb reflex save with his feet from Jamie Ward's close-range header.

The hosts offered nothing in attack until midway through the half, when they squandered two good chances within three minutes.

Dadasov fired wide from 12 yards, before the unmarked Rauf Aliyev saw his back-post volley saved by an alert Roy Carroll.

Northern Ireland were soon back on top and Agayev denied Brunt again, while Ward's shot curled over the bar.

The best chance fell to Paterson on 38 minutes, with the striker put clear by Lee Hodson, only to drag his low shot wide.

Azerbaijan took command after the break and poor marking allowed Dadashov room to sweep the ball wide from eight yards.

Oliver Norwood's lunge at Aliyev resulted in a yellow card and a suspension for the final qualifier against Israel on Tuesday.

However, the big Kaiserslautern striker made no mistake in the 58th minute, slotting past Carroll from Aliyev's low cross for the opener.

Gareth McAuley's header found the roof of the net as Northern Ireland chased an equaliser, but the main goal threat was coming from their opponents.

A fluent move on 62 minutes ended with Aliyev's long-range strike, from a Dadasov lay-off, flying just over as a lethargic Northern Ireland failed to sustain any pressure on the home goal until the dying moments.

Steve Davis picked out Paterson with three minutes left and the Huddersfield forward's volley struck the woodwork before the ball was cleared.

In a nightmare finish for Northern Ireland, McAuley received a second yellow card of the qualifying campaign to be suspended for the Israel game along with Evans, who was shown a straight red card in injury time for kicking out at Aliyev.

With the last kick of the game, Shukurov curled the resulting 20-yard free-kick into the top corner.