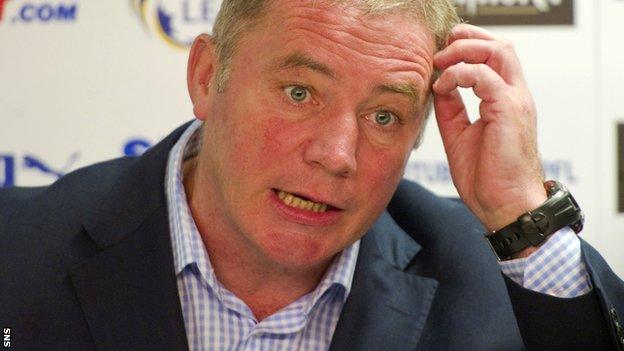 Rangers boss Ally McCoist claims he agreed to a wage cut because it was "the right thing to do" and not for the benefit of the annual report.

Financial figures published this week showed an operating loss of £14.4m at Ibrox over a 13-month period until the end of June.

"I would like to point out that my decision to take a wage cut has nothing to do with the accounts," said McCoist.

"The negotiations started well before the accounts came out."

The results revealed McCoist's salary to be £825,000 before agreeing to a wage cut, which the manager says is now closer to a 50% reduction reported in one newspaper on Friday and not, as some have suggested, a 15% cut.

McCoist insists that wages were not a motivating factor in his decision to remain as manager of the team, following a turbulent 19-month period in which the Ibrox outfit experienced a major insolvency event and was required to play in the lowest professional league in Scotland.

In recent weeks, a fraught period of boardroom in-fighting has cast a shadow over football matters at Ibrox, but McCoist says he agreed to a reduction in wages due to strains on income, which became apparent ahead of the publication of the annual report.

"The only thing I ever wanted was an opportunity to manage the club," said McCoist.

"There was a contract put down which I can tell you in all honesty was not negotiated at all.

"The finances were not important to us and that's the truth - we just wanted an opportunity to manage the football club.

"I signed the contract and we couldn't foresee what was going to happen in the next 18 months, two years, which was obviously a massive blow to the club. We are where we are at the moment.

"We just feel that where we are in terms of our league status - and the income and turnover is down - that it's the right thing to do.

"We are not looking for a pat on the back for it because any Rangers supporter in our position would do the same."

Meanwhile, a legal battle over a bid to appoint new directors to the board of The Rangers International Football Club Plc will go to court on 14 October.

The Court of Session in Edinburgh chaired by Lord Kinclaven heard concerns had been raised over the requisite notice period for issues to be raised at the company's AGM.

This week, Rangers announced plans for a 24 October AGM, taking the view that a proposal to have four new directors appointed was not valid.

A spokesman for the club board said the shareholders had not acknowledged an offer to discuss the matter.

He added: "Instead without any warning the shareholders went to court seeking an order to stop the AGM taking place. The court declined to grant the order and the legal process will now continue."

A spokesman for the petitioners said: "It is ridiculous that we are forced into going to the Court of Session in order to give the shareholders a democratic vote at the AGM.

"The stalling tactics of this board are indicative of why the shareholders felt compelled to make these requisitions in the first place."