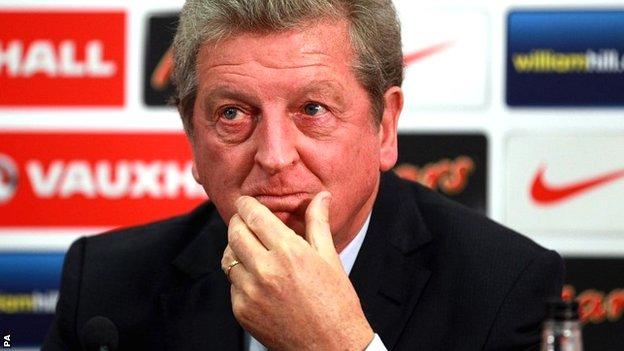 England boss Roy Hodgson believes his team will avoid the "doomsday" scenario of not reaching the 2014 World Cup.

Montenegro and Poland visit Wembley for qualifiers on 11 and 15 October respectively and England need two wins to secure their place in Brazil.

"My life at the moment is on these two games," said Hodgson.

"As for the doomsday scenarios put before me, I won't have to confront them because I believe and am confident the team will do it."

However, they remain the only unbeaten team in Group H and are one point ahead of Ukraine and Montenegro.

On Tuesday England face Montenegro, with whom they shared a 1-1 draw in Podgorica in March.

Asked about potentially having to win both remaining matches to qualify he said: "I am, of course, always nervous - any football coach worthy of the name, who really believes in his work, is nervous when the whistle goes.

"He wants all the things he wants to see come about, he is nervous the referee might make a terrible decision that might affect the team, so you can't be involved at this level and not be nervous.

"You might try and control it, but anyone who says they are not nervous suggests a laissez faire attitude, and I will not be accused of that."

Were England to be usurped at the top of the table they would face a two-legged play-off to qualify for the World Cup finals.

Roy Hodgson will join former England captains Gary Lineker and Alan Shearer as a guest on Match of the Day on BBC 1 on Saturday evening.