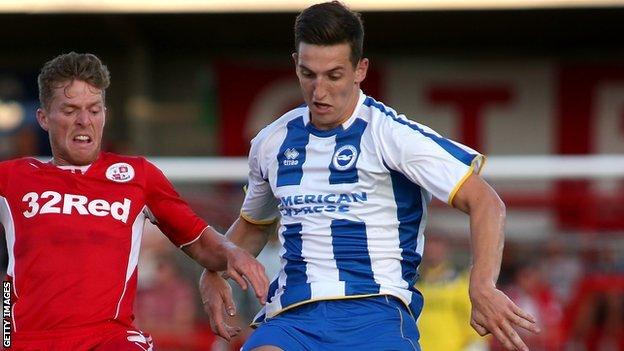 Bristol City have signed defender Lewis Dunk on a month-long loan from Championship side Brighton.

The 21-year-old has fallen out of favour with the Seagulls and has not played a game this season.

They have also sent James Wilson and Liam Fontaine out on loan to Cheltenham and Yeovil respectively.

"You want to be playing as much as you can so it's frustrating not getting a game.

"I've come out here to get some football," Dunk told BBC Radio Bristol.

A former England Under-21 international, he has spent his entire career with Brighton, making 54 first-team appearances.

"I think this move will be good for me to grow up as a man and get my career back on track," he added.

Meanwhile, City's League One match with Crawley, scheduled for Saturday, 12 October, has been postponed because of international call-ups.

With Marvin Elliott (Jamaica), Derrick Williams (Republic of Ireland Under-21s) and Wes Burns (Wales Under-21s) all absent, City have been granted permission to rearrange the fixture.

No new date has yet been set for the game.