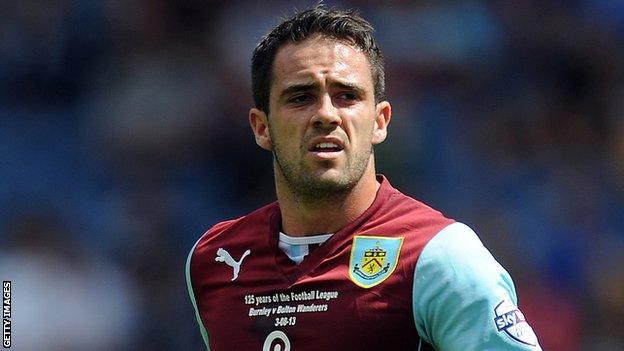 The 21-year-old forward has scored 10 goals in 13 club appearances this term.

His reward is a place in for their upcoming European Championship qualifiers against San Marino and Lithuania.

"I'm delighted he's been recognised for his fine run of form and performances," said Dyche, the Championship's manager of the month for September.

Burnley are following a run of four successive league wins, with Ings and strike partner Sam Vokes pivotal in their rise to the summit.

Ings has endured an injury-plagued two years at Turf Moor since joining from Bournemouth for a reported fee of around £1m in August 2011.

But a problem-free pre-season, as well as the chance to play as Burnley's central striker following the departure of Charlie Austin to Queens Park Rangers, has

Dyche told BBC Radio Lancashire: "I spoke to Gareth a month ago and made him aware of my thoughts on Danny, and he's followed that up.

"The England setup do their homework wisely and they're aware of who's out there. I promoted the fact that I think Danny is a very good young player who is learning and improving all the time.

"I know he [Southgate] and the England staff have been watching him on different occasions and Danny's delivered performances to be recognised as a player who deserves the right to go into the Under-21 setup."