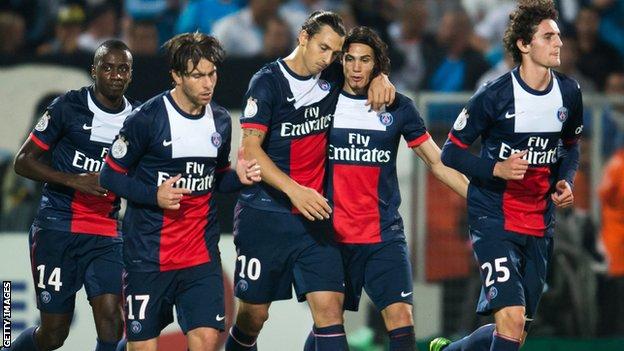 Ayew put Marseille ahead from the spot after Thiago Motta was shown a 31st-minute red card for a high tackle.

Maxwell nodded in the equaliser on the cusp of half-time before PSG went on to win and move level with leaders Monaco.

Defending champions PSG have 21 points after nine games and trail Monaco, who beat St Etienne 2-1 on Saturday, on goal difference.

"We knew there were technical qualities in the team. We showed against Marseille that there is also a soul," PSG midfielder Blaise Matuidi said after Sunday's match.

Marseille, who finished runners-up to PSG last season, slipped to fourth on 17 points.

Elsewhere, 10-man Lyon crashed to a 5-1 defeat at Montpellier, who ended a run of five consecutive draws in stunning fashion with both Victor Montano and Remy Cabella scoring twice.

Remi Garde's side have won just one of their past 11 matches in all competitions.