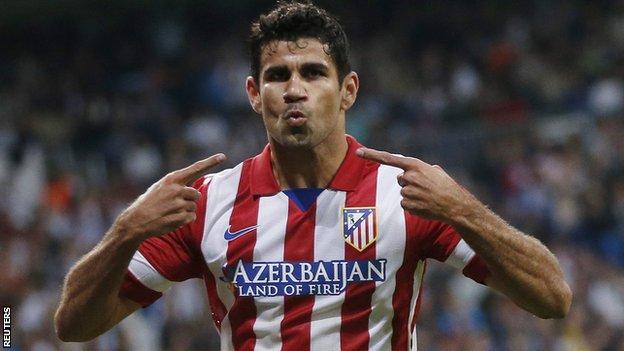 Brazilian-born Atletico Madrid striker Diego Costa has missed out on a place in Spain's squad for their final World Cup qualifiers - as he waits for clearance after switching allegiance.

Costa, 24, has scored eight goals in seven games for Atletico this term and has now opted to play for Spain.

Holders Spain need four points from two home games against Belarus and Georgia to reach the 2014 World Cup in Brazil.

Costa, who has never played competitively for Brazil, is eligible to represent Spain after living in the country for five years following his move to Atletico in 2007.

Mata is one of five Premier League-based players picked by Del Bosque, although there is no place for Tottenham striker Roberto Soldado.

Atletico, who have won all seven of their opening La Liga matches, are represented by four players including ex-Barca striker David Villa.

Sevilla left-back Alberto Moreno, 21, is promoted from the Under-21 squad, with Barcelona's Jordi Alba still recovering from a hamstring injury.