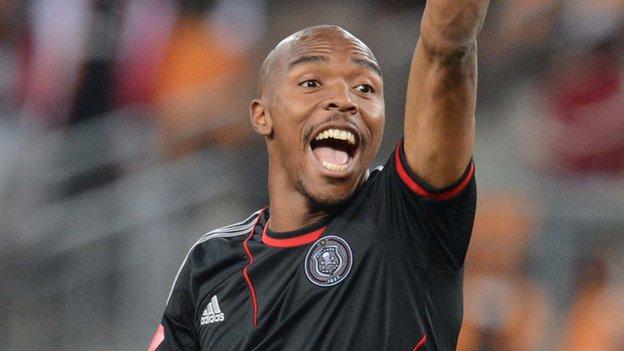 Orlando Pirates were left frustrated in front of goal after being held 0-0 at home by Esperance in the first leg of their Caf Champions League semi-final.

It was the third consecutive match without scoring for the South African side in Africa's elite club competition, and jeopardises their chances of reaching the decider.

In the early rounds of the group stage, Orlando Pirates scored freely, scoring three goals away to Ahly and four at home to another Egyptian side, Zamalek.

Esperance boasted a superb defensive record ahead of the Orlando meeting with seven clean sheets in 10 matches.

Pirates, the only South African winners of the competition, came closest to breaking the deadlock five minutes from time. Defender Thabo Matlaba unleashed a drive that appeared goal-bound until Cherifia acrobatically pushed the ball away with one hand.

Cameroonian striker Yannick N'Djeng troubled Pirates several times with one shot just off target and another forcing Senzo Meyiwa to make a snap save.

The second leg of the semi-final will be held in Tunis on 19 October.

Earlier, Coton Sport's Champions League semi-final against Al Ahly was abandoned in the second half because of adverse weather conditions.

Zambian referee Jan Sikazwe brought a premature end to the first-leg match in Garoua when he judged the pitch to be unplayable after a heavy downpour of rain. The score was 0-0 at the time.

Al Ahly were the dominant force with Mohamed Aboutrika and Abdallah Al Saied having first-half chances with close-range headers. Walid Soliman should also have scored just before the storm blew in.

Coton Sport's best chance came in the 51st minute when Moussa Yedan was one on one with Al Ahly goalkeeper Sherif Elkrami and missed the target.

The Confederation of African Football's rules state that in such an instance "the match is to be replayed 24 hours later at the same venue and with the same referees".