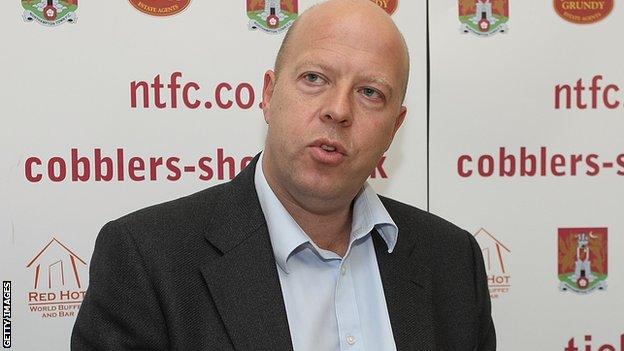 Northampton Town chairman David Cardoza has called on the club's players to justify their wages and improve the team's results.

The Cobblers have only picked up one win and two draws in nine league games.

"It's not good enough, simple as that. We've got well-paid professionals with a lot of experience.

"There's no pressure on Aidy Boothroyd. He's going to get the time to turn it around and I'm 100% behind him," Cardoza told BBC Radio Northampton.

David Cardoza always speaks passionately - as a supporter - when it comes to the team's fortunes.

It's unusual for him to criticise the performances and that will have resonated with a lot of supporters. But there's plenty of time for this group to win the fans over.

The team seems to have far too much experience in it to continue to struggle but someone - anyone - needs to find form in front of goal now that the defence looks stronger.

The Cobblers reached the League Two play-off final last season before defeat by Bradford City at Wembley cost them promotion.

The squad has been overhauled since then, and with the club in the middle of an injury crisis, more recruits have not been ruled out to join newly-signed Mathias Doumbe and Paul Reid.

However, Cardoza expects more from a squad which he says has been assembled with a very competitive playing budget.

"It was a top-seven budget before we signed Reid and Doumbe, so we're well up there now," he said.

"If we have to, we will [make signings], but at some stage you have to say enough is enough and we have to try get the best out of what we've got."

Cardoza expressed particular concern about the team's shortage of goals, with only six scored in nine league games.

"I don't want to put too much pressure on the strikers, but we've got Clive Platt and Roy O'Donovan and they're paid a lot of money to score goals and set goals up.

"I expect to see that improve in the short and long term."

Northampton are about to submit plans for a new East Stand at Sixfields, but Cardoza wants the club to be moving forward both on and off the field.

"I'm just really hoping we see something in the next couple of games [away to AFC Wimbledon and Oxford] that shows that we've turned the corner and moved on."