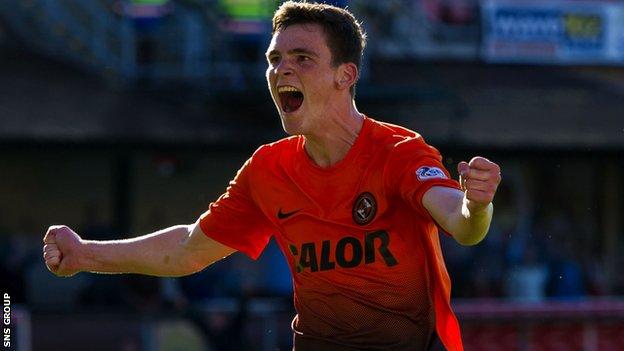 Dundee United have moved swiftly to secure left-back Andrew Robertson on a new extended contract until May 2016.

Robertson has established himself as a first-team regular and he was named in the Scotland U21 squad this week.

"He has been at it from the moment he came in the door," said manager Jackie McNamara. "His attitude and performance levels deserve to be rewarded."

Robertson has scored once in his 10 appearances for United.

"He has made the left back position his own," added McNamara. "He has settled in well within the squad and has been a great ambassador for Dundee United.

"The club have recognised this and are committed to rewarding performance and ability but also ensuring protection for the club. This shows the fans we are continually evolving and ensuring the long term wellbeing of Dundee United."

"Coming to Dundee United has been everything I hoped and more," he said.

"The dressing room is brilliant, the atmosphere around the place feels right and I am learning as a footballer from great coaches."