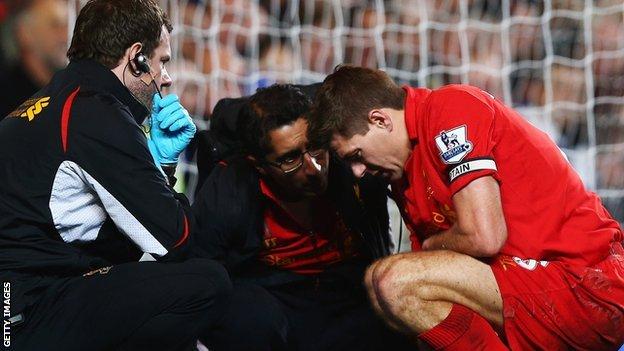 The Liverpool captain was speaking about Iqbal following his nomination at this year's Asian Football Awards.

The awards, which take place at Wembley Stadium on Tuesday, recognise the outstanding contribution of individuals with a South Asian heritage.

Gerrard said: "I've had serious injuries of late, and without the doc I'd have been in big trouble."

Speaking to BBC Asian Network, Gerrard added: "In his spare time, I think Zaf is always pushing for kids to stay healthy and get involved in sport. Credit to him."

Now in their second year, the awards honour those in the professional game and in grassroots football initiatives.

Liverpool manager Brendan Rodgers said: "I think the awards are really important. It's great that you can reward people for being inspirational in the community.

"I think people like Zaf are a shining light for people who want to go on and have a great career."

Iqbal is up against Shabaaz Mughal (Tottenham Hotspur), Sangi Patel (QPR) and Imran Alam (QPR) for the Behind the Scenes - Medical Award.

Asian Football Awards founder Baljit Rihal said: "Our primary objective is to create an awareness of the positive efforts made by Asians within the football industry.

"We also aim to engage with organisations and individuals to help increase participation levels of the Asian community within the UK.

"I believe the awards will help highlight the growing importance the Asian community plays in the professional game, as well as at grassroots level, and that it will serve as an inspiration for others to get involved."

Speaking about football at grassroots level, Harban Singh, the head coach of Mahal FC, a Midlands-based semi-pro British Asian team, said: "We have now got networks, with the scouts at higher football clubs.

"We get talented players and they are getting picked up. For example, we have built a good connection with West Bromwich Albion."

Singh also reflects on the changing attitudes of British Asians, saying: "The attitudes of Asian parents are different from twenty years ago. We are British parents and we now encourage sports - as well as education, in schools."

You can hear the full interviews and highlights from the Awards on the BBC Asian Network's Noreen Khan show 13.30-17:00 BST, all next week.