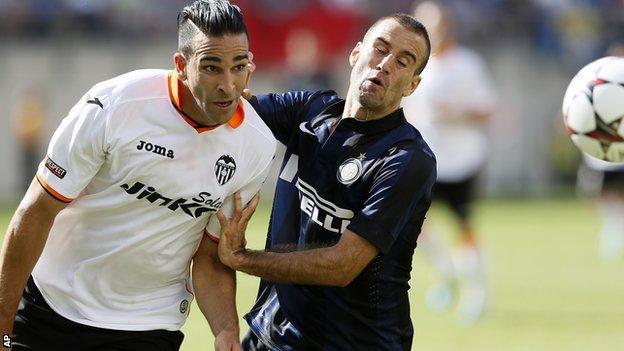 Valencia defender Adil Rami has been suspended by the Spanish club for one week without pay after publicly criticising his coach and team-mates.

In a radio interview, the France international questioned the leadership skills of Miroslav Djukic and said he does not speak to the Los Che boss.

The 27-year-old also commented on the character of the club's players, saying they "don't look at you in the face".

A club statement said Rami has shown "regret for his declarations".

The statement added: "Regardless of the punishment, we have agreed to work together to find a satisfactory solution for both parties."

The La Liga side opened disciplinary proceedings against Rami before issuing the suspension on Friday.

Rami, who was linked with a summer move to Premier League sides Arsenal and Manchester City, has not played in any of Valencia's three matches since he made the remarks on 24 September.

"This year we lost (David) Albelda, (Roberto) Soldado and Tino (Costa) - and now in the locker room we only have a bunch of players who don't look at you in the face," he said in the interview.

"I don't talk with Djukic. He's the captain of the ship but we'll see where we end up at the end of the season."

Initially, Rami said he had done nothing wrong and accused the club of "damaging his dignity and image" as a professional footballer.