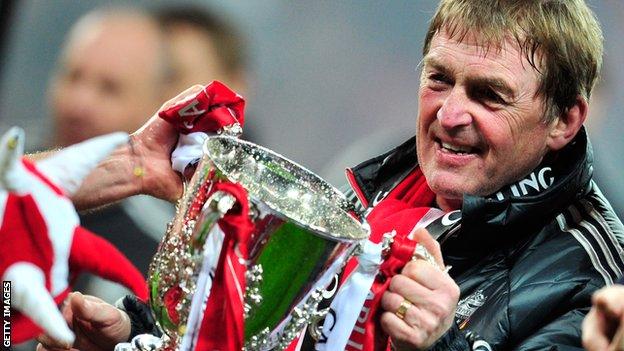 Former Liverpool player and manager Kenny Dalglish has returned to Anfield as a non-executive director.

Dalglish's second reign as Reds manager ended in May 2012 despite League Cup success after the club finished eighth in the Premier League.

The three-time European Cup winner made 515 appearances and scored 172 goals during his time as a player at Anfield.

"I have always said if there is anything I could do to help I would make myself available," he said.

"It is an honour and privilege to be asked to return to Liverpool.

"I am looking forward to working with the board of directors and contributing to the strategic issues that affect Liverpool Football Club."

Dalglish arrived at Liverpool in 1977 from Celtic and went on to win six First Division titles, including one as player-manager, an FA Cup, four League Cups and three European Cups for the Reds.

After leading them to the First Division title in 1985-86 as player-boss, he added two more league titles as manager - plus an FA Cup - before resigning in 1991.

Dalglish, who went to win the Premier League as Blackburn Rovers boss, returned to manage the club for a second time in the wake of Roy Hodgson's departure in January 2011, initially on a caretaker basis until the end of the season before being handed a three-year deal.

The ex-Reds star's dismissal was met with some surprise but his replacement Brendan Rodgers welcomes the new board member to the club.

"When I met with Kenny to discuss this appointment, I was struck by the passion and drive he still has in wanting to see Liverpool return to where it should be - one of the most successful clubs in the world," Rodgers said.

Liverpool owner John W Henry said: "We are delighted Kenny has accepted our offer to join Liverpool as a non-executive board director and we are sure he will make a valuable contribution to the club's strategy.

"Kenny has a unique relationship with our supporters and embodies everything that is special about Liverpool."