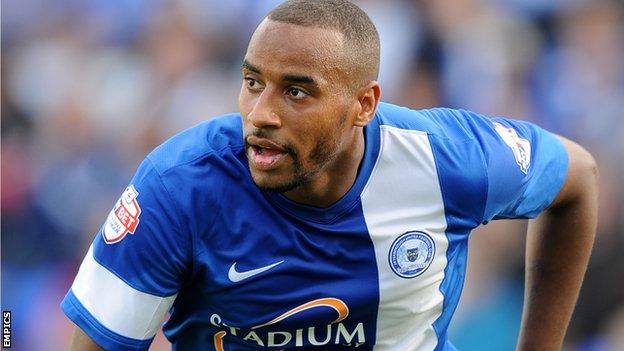 Posh midfielder Danny Swanson saw an effort cleared off the line in a quiet first half, then fired wide of the post shortly after the break.

Tom Pope and Lee Hughes both had half chances for Vale, who then gifted the visitors the points late on.

With four minutes left, Barnett found himself all alone in the penalty box to fire in low for the winning goal.

"To lose a goal like that at the death is very disappointing. I feel gutted for the boys that we've come away with nothing.

"All the things we lacked against Rochdale on Tuesday night, the effort and the closing people down, were there.

"Anthony Griffith and Carl Dickinson got booked early doors, but then kept their discipline well in the second half, as we certainly needed to keep 11 players on the pitch to get any sort of result.

"But we've done everything right except see out the game. A 0-0 draw would have been a different story. We would have all come off with a smile on our faces."

"A bit of magic from the big man. One, two and a great finish. Bit of individual brilliance to win us the game after a really tough match.

"It's always a sign of a good team, when they don't actually play well they win the game. That's really key, that's general teams that get success.

"In the second half we stepped it up a bit, Little gave us more drive at right back. Mendez again has come on and given us more energy, I was pleased with that.

"They're a great bunch of lads but they know themselves they haven't performed to the standards I expect, but we won the game."