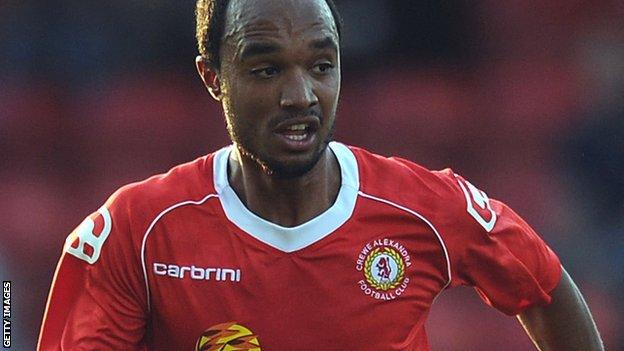 Byron Moore scored his first goal of the season to help League One strugglers Crewe to victory at Preston.

Moore put the Railwaymen in front against the run of play in the first half, firing low past Declan Rudd from inside the box.

Brad Inman doubled the advantage with a stunning curled shot from the edge of the area after the break.

From the resulting corner Hume, a surprise starter after being called up for international duty with Canada this week, hit the top of the bar from outside the box.

Crewe Alexandra earned their first League One win in seven games, dating back to 17 August when they overcame Tranmere Rovers 2-1.

The clean sheet was also the first of the campaign for the Alex.

North End kept the pressure on with Stuart Beavon testing Phillips again before Moore got onto the end of a slick Chuks Aneke ball to open the scoring with a rare chance at the other end.

Then, as the League One high-flyers went in search of a leveller, Inman struck to make it 2-0.

Adam Dugdale came close to a third, lashing his effort onto the underside of the bar before it ricocheted off Rudd's back and behind for a corner.

While Crewe secured only their second league win of the season, with their first clean sheet this term, it was Preston's third successive loss in all competitions.

"There are fine margins in football. We knew the first goal would be vitally important because we knew Crewe's confidence levels could be quite fragile.

"We started very positively and we needed to get that first goal. Unfortunately they got it and, once they've got it, it's given them something to hold on to.

"I'm disappointed to lose at home for the first time, but we always said that it's a 10-month season and not a two-month season."

"They were both fantastic finishes from Byron and Brad and we could have had a third when Adam Dugdale's effort hit the bar as well.

"I've been saying for the last few weeks that our performances have been reasonably good although we haven't had the results. Now we have to take real confidence from a great away win here against a good Preston side.

"We changed the system and practised it during the week, so for it to come off was very pleasing. They have transferred what we did out on the training ground into the game and that is all you can ask."