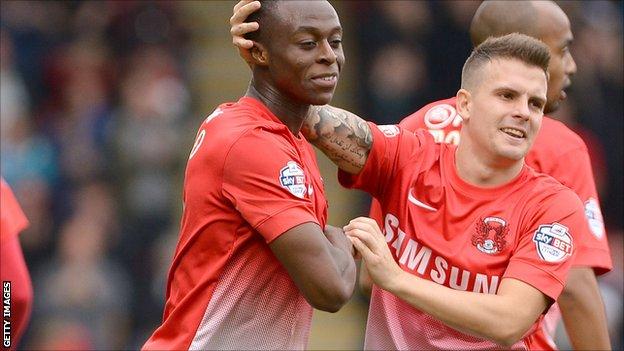 League One leaders Leyton Orient remain unbeaten after goals from Moses Odubajo and Kevin Lisbie saw them come from behind to defeat MK Dons.

Patrick Bamford gave the visitors the lead with a fine low finish from outside the box before Odubajo levelled with a strike from 15 yards.

Dean Cox twice went close for the O's before Lisbie gave them the lead after poking the ball past Ian McLoughlin.

MK Dons pushed for a leveller and Izale McLeod struck the crossbar late on.

"It's been a tremendous day today, with 6,300, which is our biggest gate of the season, that was fantastic.

"It's not about one player today, it's about doing it for each other they were all grafting, Moses Adubajo slotted home well, a great composed finish for the equaliser.

"Well the winner was great link up between Lisbie and Mooney, it was great to see the movement and understanding like that, at any level, to get the vital goal was fantastic.

"Quite simply today we were the better team and deserved to win."