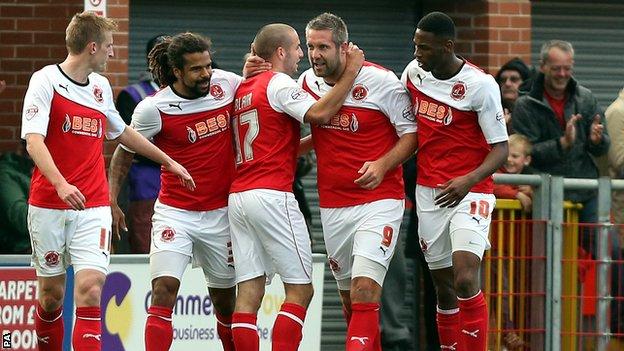 Jeff Hughes flicked on a cross into the path of Parkin, who fired in past goalkeeper Tommy Lee from eight yards.

A header from Liam Cooper from a Ritchie Humphreys corner looked like being enough for a Spireites win.

Hughes blazed a second-half penalty over the bar before veteran striker Parkin struck in the dying moments.

Two successive league defeats for Chesterfield, including a having been 3-0 in front seven days previously, had resulted in their lead at the summit being reduced to a single point.

Paul Cook's team controlled the game at Highbury for long periods and they forced home goalkeeper Scott Davies into a series of fine saves before Parkin's equaliser.

Veteran Humphreys came closest to a goal for the visitors towards the end of a scoreless first period, his effort cleared off the line by Ryan Cresswell.

Tendayi Darikwa and Eoin Doyle were also denied by Davies either side of the interval.

Cod Army midfielder Antoni Sarcevic, League Two's player of the month in September, looked the most likely to create something for the home side after defender Cooper had netted his first goal for Chesterfield following his summer move from Hull.

Sarcevic fired over from the edge of the box and was then fouled by Ian Evatt for the spot-kick, which was wasted by Hughes.

Fleetwood appeared to be heading for a third defeat in six home league outings before Parkin snatched a draw for Graham Alexander's side.

"I would say I'm content with a point. We got a goal that we deserved and it's a pity it didn't come earlier in the second half to give us a bit longer to maybe go on and get a winner.

"It's the top two in the league at this moment and neither wants to get beaten by the other one. Sometimes it takes a goal to open up a game.

"We know we come strong in the second half and I think that showed in the game. All the fans can see we did everything to win."