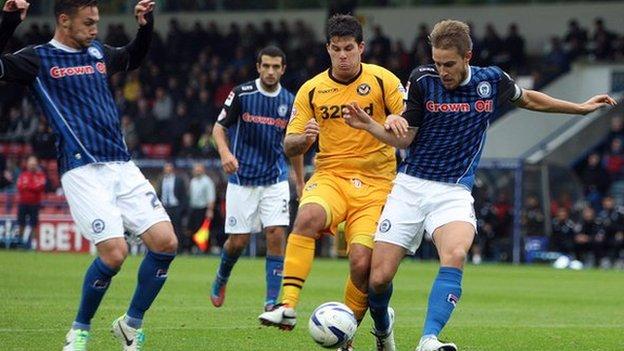 Vincenti put Rochdale on their way after five minutes with a long-range effort which gave away goalkeeper Lenny Pidgeley no chance.

Dale dominated and Graham Cummins added a second with a tap-in seven minutes before the interval.

Substitute Hery scored with his first touch after Rochdale capitalised on a defensive mistake by David Pipe.

"We gave Peter Vincenti a bit of stick in the week about shooting so early in the Port Vale. He shot early again today and he's got it right.

"I'm pleased for Peter because, after his suspension, he's had to fight to hold onto a starting jersey.

"He's got his head down, backed that up with hard work and he's learning to hold onto the ball better. We're pleased with his progression."

"[I'm] very disappointed but we were convincingly beaten and certainly by the better side. Sometimes you have to give the opposition the credit.

"I think they were probably the best side we've come up against. We found it hard to deal with them. [They] passed the ball very well and caused us problems.

"I certainly thought we were off the pace today."