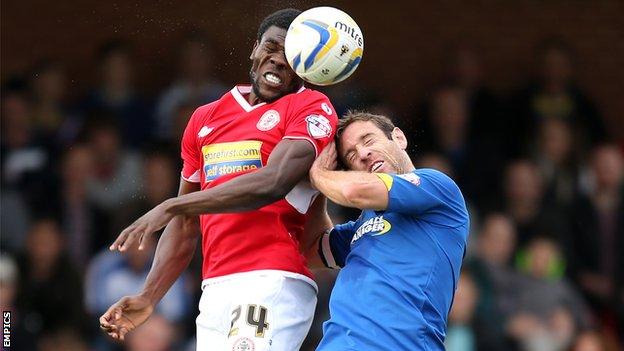 Kayode Odejayi scored and was sent off as bottom-of-the-table Accrington Stanley were denied their first league victory of the season by AFC Wimbledon.

Odejayi headed home Lee Naylor's corner to put the visitors ahead, but was dismissed just before half-time for raising his hands to Callum Kennedy.

That stirred the Dons into action, with Jack Midson and Luke Moore denied by goalkeeper Marcus Bettinelli.

And the pressure finally told when Alan Bennett nodded the ball in late on.

"I thought we were poor again today in many aspects, it started slow we tried to get the messages across but the players didn't always read that and we ended up conceding a sloppy set piece and it ultimately comes down to desire.

"We can take some positives, we kept going and created chances and we didn't stop, so that was good.

"Confidence has been low, but I said we would have a sticky patch and this is it, and we simply didn't function well with two up top.

"But it was a good header to equalise and we made some ludicrously strange decisions. It was one of them where we were fragile and the crowd were not happy and the players took a bit of a knock, but a year on from when I took over I feel we are in a better place."

"I'm very proud because the lads were magnificent.

"I said before the game that if we scored first, we would go on to win the game. Certain circumstances have again dictated to us that we haven't done that.

"We played some great stuff and you could see the relief within the team when we got a goal up.

"The red card was one of those decisions. I'm not going to mention it because I don't think it warrants me mentioning it."