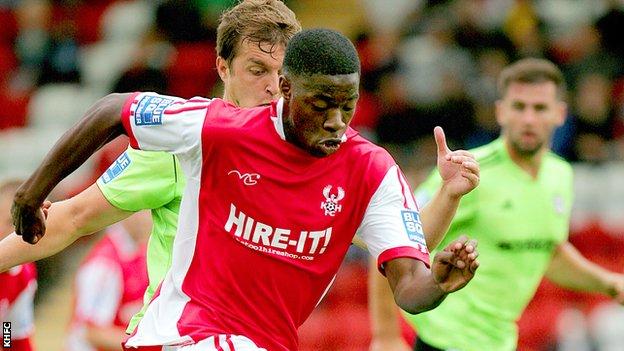 Goals from Joe Lolley and Nathan Blissett saw Kidderminster beat Southport to extend their unbeaten run to five games and close the gap on leaders Cambridge to six points.

Lolley fired Harriers ahead after Amari Morgan-Smith had hit the woodwork.

James Smith then levelled for Southport when he nodded past Nathan Vaughan.

But Harriers were soon ahead again, on the stroke of half-time, when Blissett headed in his first goal of the season from Lee Vaughan's cross.

Karl Ledsham went close for Southport, forcing a decent save from Nathan Vaughan and Danny Hattersley almost levelled late on when his shot was blocked.

But Harriers held on to become the first team to win at Haig Avenue this season.

"I'm a little bit frustrated because we felt we'd done enough to get something out of the game.

"We went behind early on, which is something we need to look at because it's happened a couple of times now.

"We huffed and puffed and had a couple of penalty incidents that weren't given. If they're given, we probably go on and win the game."

"It's always good to get the three points. This was Southport's first defeat here and they have a good home record.

"And it's pleasing as we have one or two missing, those who have come in and contributed have done really well.

"I was disappointed to concede right on half time but to go and get straight back in front just changes the team talk slightly and, in the second half, although Southport had a lot of the ball, I don't think they really hurt us too much."