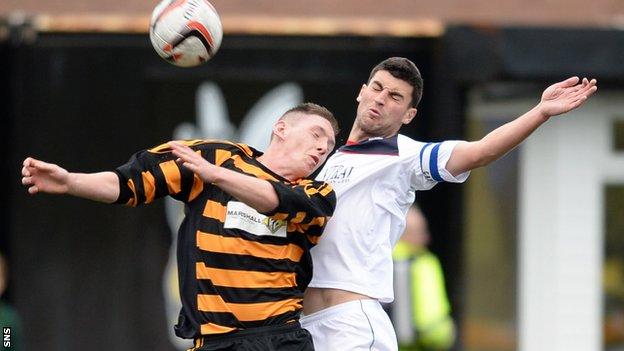 Alloa and Falkirk extended their unbeaten runs with a goalless draw at Recreation Park.

Phil Roberts fired straight at Scott Bain from 12 yards in the third minute before cutting in from the flank four minutes later only to be denied once more by the hosts' goalkeeper.

At the other end, Declan McManus's looping header from Graeme Holmes's cross was brilliantly stopped by Graham Bowman.

Rory Loy had the best chance of the half after being released clean through on goal but Bain blocked well before recovering to tip over Blair Alston's follow-up.

Alloa were denied a late winner that would have secured a third consecutive victory as Ed Ferns' low corner was flicked goalwards by Kevin Cawley, but Kieran Duffie was well placed to clear off the line.

Falkirk remain above their opponents in the table following a fourth match without defeat.