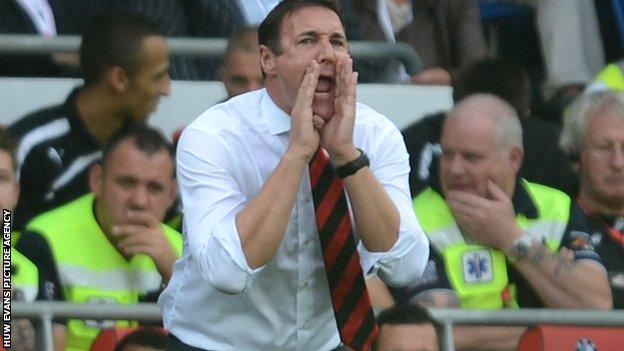 Manager Malky Mackay says Cardiff's lacklustre performance in the first half was the reason for the 2-1 defeat to Newcastle.

The Bluebirds found themselves 2-0 at half-time to Newcastle thanks to two goals by striker Loic Remy,

"We started really slowly and you cannot give good teams and players time and space on the ball," said Mackay.

"You end up being punished, and we were in the first half. We made a couple of changes at half-time and had a few words.

"In the second half, we saw the team that I know and that is the way we have been playing during the last few weeks.

"We have to make sure we play, because in this league, you are punished if you don't."

Without the heroics of goalkeeper David Marshall, the home side would have been dead and buried at half-time. He produced a string of outstanding saves to keep his side in the game.

The Bluebird may have left themselves too much to do after a poor first 45 minutes, but dominated the second half as Newcastle tried to defend their lead.

The introduction of Jordan Mutch changed the game for Cardiff as he created Odemwingie's first goal for the club and missed a chance to level the scores in the dying moments.

Mackay, who saw his Cardiff side slump to their second successive home defeat in the Premier League, says he believed his side were capable of salvaging a point against Newcastle.

"We had great momentum and had balls flashing across their box," said Mackay.

"We had three or four (chances) which did not break properly for us.

"I thought at one point the second goal was definitely coming, because we played really well in the second half."