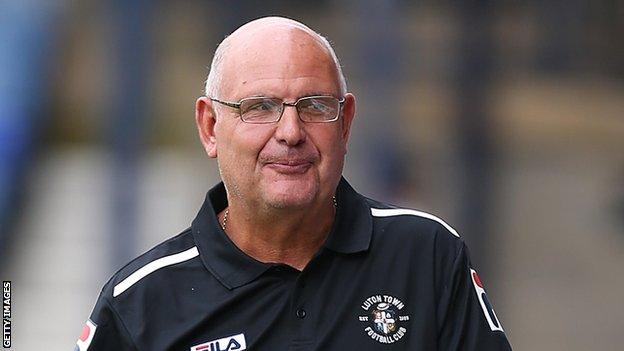 Hatters fan Mark Baldwin had an altercation with captain Ronnie Henry after a win over Lincoln two weeks ago.

He told BBC Three Counties Radio: "It was one of the best days of my life.

"I didn't have a clue it was going to happen. John said 'I think you're a brilliant fan, I want you to have a few words with the players'."

Baldwin voiced his disdain from the stands at half-time against Lincoln, with the Hatters 1-0 down.

Luton recovered to win 3-2 and skipper Henry addressed the supporter in a heated conversation afterwards.

Still subsequently and invited Baldwin in to the club to talk about his concerns.

"I went in to see John Still, [chief executive] Gary Sweet and Ronnie Henry to apologise and get my point across," he said.

Luton came from 3-1 down to beat Halifax and move up to fifth in the Conference Premier, after which Baldwin was beckoned onto the pitch by Still, although he said the exact nature of his "rallying cry" in the post-match huddle would remain private.

But he said he would "never again" shout criticism from the terraces.

Luton coach Hakan Hayrettin added:"We have an ethos that if we're going to do something we need everyone on side.

"We're just showing the supporters we appreciate everything they do for us on a Saturday. They could have turned against us at 3-1 but they showed fantastic support."