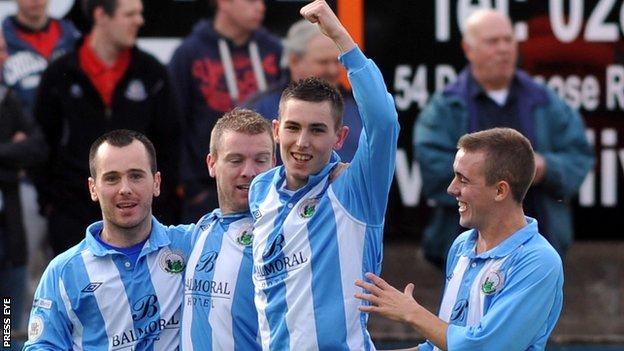 Portadown relinquished top spot in the Premiership after fighting back to draw with Warrenpoint at Stangmore Park.

Daniel Hughes poked in the opener and Ruiari Devlin slotted home to make it 2-0 on 36 minutes after bursting clear and rounding keeper David Miskelly.

Peter McMahon pulled one back by firing past Jonathan Parr before Darren Murray levelled with a close-range finish from Chris Casement's 69th minute cross.

Gary Twigg clipped the bar as the Ports chased a late winner.

Hughes beat Gary Breen to the ball before finding the net after seven minutes and the Town forward saw his lob tipped over by Miskelly three minutes later.

Parr kept out an Aaron Traynor effort before Devlin doubled the lead, although McMahon struck just four minutes for the visitors.

Portadown dominated the second half and Murray secured a deserved point, although he could have been more with Twigg denied by the woodwork while Tim Mouncey went close late in the game.

"Thankfully we got an early lead, giving us something to hold on to in the latter stages," said Warrenpoint boss Barry Gray.

"We tweaked the team a bit to deal with Portadown and it worked well to get a point."