Hart, who has been widely criticised for some obvious errors in recent weeks, was beaten by Romelu Lukaku as Everton went ahead before losing 3-1.

And the goal raised further questions about the keeper's form.

Despite concerns over his form, Joe Hart had not conceded a goal in the first half of the Premier League this season until Romelu Lukaku's strike for Everton.

"It wasn't a simple decision [to play Hart]. It was a very difficult decision," Pellegrini said.

"But I think Joe needs the trust of all us, from me, the other players, the fans."

City's other senior keepers are Costel Pantilimon and Richard Wright, neither of whom have played a league game for City.

England's number one Hart has two crucial World Cup qualifiers against Montenegro and Poland later this month and has been backed by international manager Roy Hodgson.

And Pellegrini has been impressed with the keeper's response to his dip in form.

"It was not an easy game for Joe but he did not have too much work," Pellegrini added. "He is mentally strong. I spoke long with him after the match against Bayern Munich. It was not an easy decision because I was not sure how he would react.

"Of course, he feels he didn't do well and was guilty, but he showed how strong his character is.

"But after talking with him I felt he had the character to play today and I am very happy for him.

"I am always talking with the players and my staff. It was a decision I decided yesterday. But how near, it doesn't matter - he played." 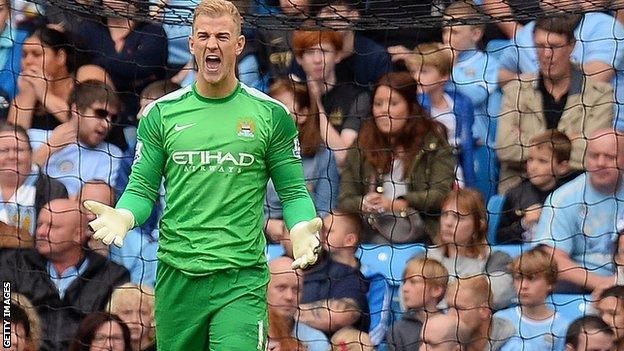 Meanwhile, Pellegrini has said it is too early to assess centre-back Vincent Kompany's injury. The City captain limped off after 33 minutes of the 3-1 win over Everton having only returned to action in the middle of September following a month out with a groin injury.

But when asked if it was a repeat of the same injury, Pellegrini said: "I cannot tell you. We will wait until tomorrow."