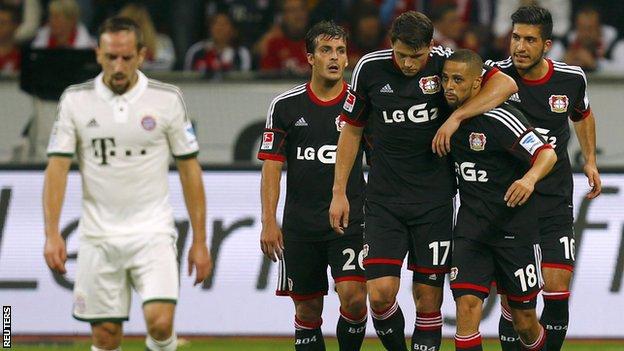 Bayern Munich moved to the top of the Bundesliga with a 1-1 draw at Bayer Leverkusen after Borussia Dortmund suffered their first defeat.

Pep Guardiola's side led through Toni Kroos's 30th-minute strike, but Sidney Sam tapped in within 60 seconds to level for Leverkusen.

Bayern Munich extended their unbeaten run to 33 Bundesliga games with the 1-1 draw at Bayer Leverkusen. The Bavarians are now closing on Hamburg's record of 36 games, which was set in January 1983.

Leverkusen are a point adrift of Bayern and level with Dortmund, who suffered a 2-0 loss at Borussia Monchengladbach.

Dortmund dominated but were undone by late goals from Max Kruse and Raffael.

They started the day level on points with Bayern at the top of the table but with a better goal difference.

But Jurgen Klopp's team, who had scored 10 goals without reply in their previous three games in all competitions, conceded twice in the final 10 minutes to suffer their first Bundesliga defeat since the final day of last term.

Last season's Champions League finalists crumbled after Germany defender Mats Hummels was sent off for a foul on Kruse, which resulted in a penalty.

Top of the Bundesliga

Kruse dusted himself off to score from the penalty spot, five minutes before Raffael sealed Monchengladbach's fourth win of the season.

It meant European champions Bayern would move to the summit of the German top flight for the first time this season with a point at Leverkusen.

And Guardiola's team had to be content with a draw, despite controlling a pulsating game at the BayArena.

Leverkusen goalkeeper Bernd Leno guaranteed a point for his side by denying Franck Ribery twice in as many second-half minutes as well as Mario Gotze in the closing stages.

Bayern also had a penalty appeal turned down when Thomas Muller tumbled after having his shirt pulled.

Mainz came from two goals down to draw 2-2 with Hoffenheim, Schalke defeated 10-man Augsburg 4-1 and Stuttgart drew 1-1 at home with Werder Bremen.