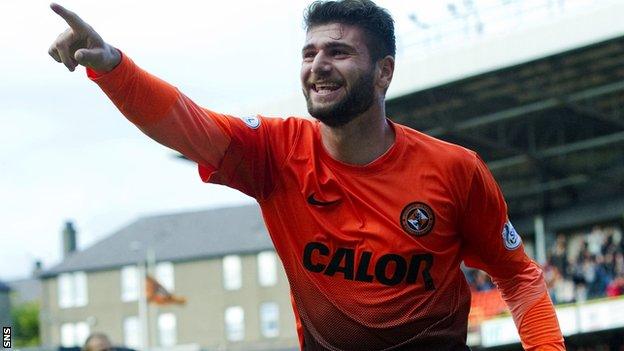 Dundee United manager Jackie McNamara acknowledged the quality of Nadir Ciftci's match-winning goal, but urged him to be more clinical.

The Turkish forward's volley gave United a 1-0 win at home to Kilmarnock to make it five games unbeaten.

"I think the one he scored was probably the hardest chance he had," McNamara told BBC Scotland.

"He took his goal well but he had a few other chances and could've helped settle our nerves a bit."

Ciftci, 21, arrived at Tannadice in July following spells in England, Turkey and the Netherlands.

"His all-round game; he's strong, he's quick," said McNamara. "You can see he cause defences problems.

"We could've made it a bit more comfortable. It's taken a fantastic save from our goalkeeper to ensure it stayed 1-0."

Radoslaw Cierzniak made a string of crucial saves as Killie pushed for the equaliser in the final 15 minutes.

Jackson Irvine had a diving header and a long-range shot stopped by the Pole, and Sammy Clingan's free-kick was also tipped over.

Despite their profligacy, United looked menacing in attack and McNamara was pleased to see substitute Gary Mackay-Steven on form.

"He was excellent when he came on and looked a real threat going forward, running at them all the time," he said.

English Premier League side QPR had scouts at Tannadice to watch United's 17-year-old defender John Souttar, who has already been the subject of a bid by Sunderland.

"He was excellent on the ball," McNamara added. "He was up against a very experienced player in Kris Boyd but John stuck to his task very well."