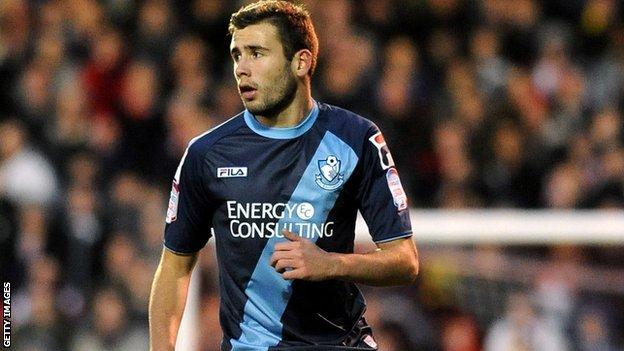 Bournemouth's Steve Cook was left with a gashed head after being struck by a coin when celebrating during the 5-2 Championship home win over Millwall.

Defender Cook, who returned to the pitch after lengthy treatment, was celebrating the fourth goal with his team-mates in front of Millwall fans.

"There is no way the players deserve to have things thrown at them," said Bournemouth manager Eddie Howe.

"It should not have happened and I hope it does not happen again."

Howe's side fought back from 2-0 down to secure their first win in four matches.

After former Millwall player Lewis Grabban scored the fourth goal, he and a group of his team-mates celebrated near the visiting fans.

A section of the travelling support were angered, prompting police to move in to prevent any further trouble.

"Crowds can shout what they like and Lewis was doing nothing untoward after scoring his goal," added Howe.

"Football is an emotional game and I can understand the celebrations."