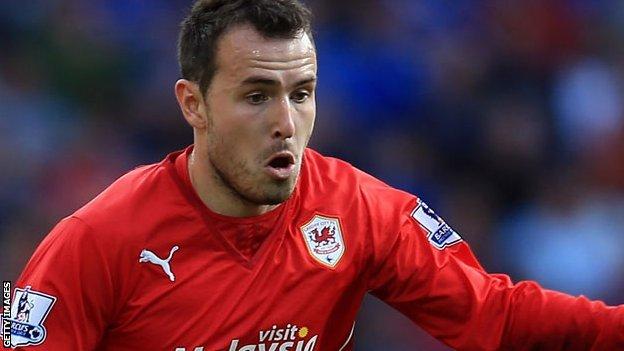 Cardiff boss Malky Mackay has praised the impact that Jordon Mutch has made as a substitute this season.

Mutch came on at half-time on Saturday with Cardiff trailing Newcastle 2-0 and although the Bluebirds lost 2-1 he created Peter Odemwingie's goal and had a good chance to equalise late on.

"He is a top young talent and he is only 21 years old," said Mackay of the England Under-21 midfielder.

"We have been bringing him through gently and he's learning all the time."

I know the potential he has got and he is going to be a top, top player.

Mutch has made an impact for Cardiff as a substitute in the last two games.

He scored the winner in Cardiff's 2-1 victory over Fulham and played a key role in hauling his side back to 2-1 against Newcastle.

"He came off the bench last week and scored a good goal, but I thought he really took this game by the scruff off the neck," said Mackay.

"I know the potential he has got and he is going to be a top, top player.

The Bluebirds boss did not hide his disappointment at his side's first-half performance against Newcastle but he dismissed any suggestion that he made any major tactical changes.

Mackay also warned his side that they cannot afford to rest on their laurels and have to be at their best for every game in the Premier League.

"If we don't start the way we know, we struggle," said Mackay.

"It has only happened on four or five occasions in the time I have been here.

"It was something my staff and I recognised at half-time, and it wasn't anything tactical we changed.

"But it was about players stepping about and getting to the ball, picking up runners and that is what we did."