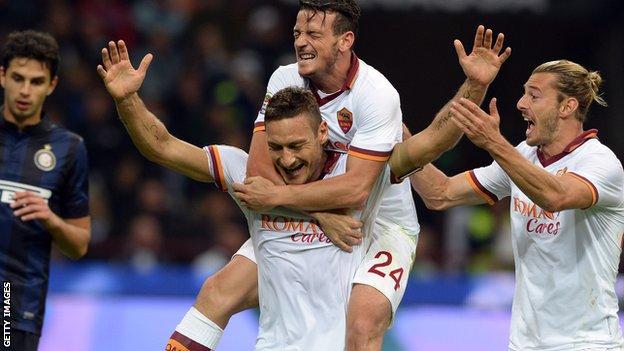 Francesco Totti scored twice as Roma moved five points clear at the top of Serie A with a 3-0 victory over fourth-placed Inter Milan at the San Siro.

Totti, 37, opened the scoring with a powerful finish in the 18th minute.

The Roma captain added a 39th-minute penalty after a foul on Gervinho before Alessandro Florenzi sealed the win.

Federico Balzaretti was sent off 11 minutes from time but Roma still won a seventh successive league game, their best start to a Serie A season.

"This squad's continuity is the greatest thing," Totti said.

"Winning seven straight matches isn't easy. I don't think anyone expected this start to the season.

"But the club put the players in place and when you have the right frame of mind, good things happen."

Defeat for Inter was their first this season and they are seven points adrift of Roma.