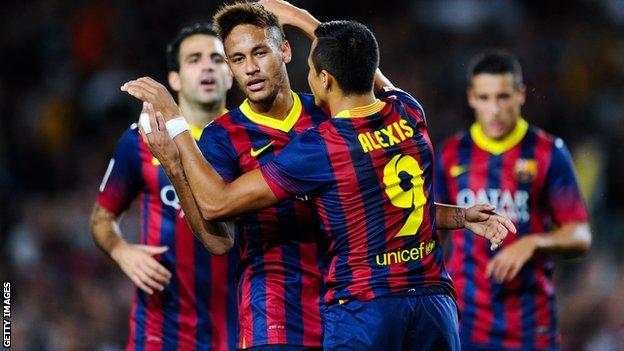 Barcelona continued their perfect start to La Liga as they came from behind to beat Real Valladolid 4-1, their eighth win in as many games.

Javi Guerra headed the leaders in front before Alexis Sanchez equalised, with Xavi side-footing Barca ahead.

Sanchez made it 3-1 and then provided the pass for Neymar to add a fourth.

Elsewhere, Cristiano Ronaldo rifled home a 94th-minute winner as Real Madrid twice came from behind to win 3-2 at Levante.

The hosts took a surprise lead through Baba Diawara before Sergio Ramos levelled from a corner soon afterwards.

But in a dramatic finish, Alvaro Morata scored a 90th-minute equaliser and Ronaldo's deflected shot in the fourth minute of stoppage time secured the points.

"When our team plays, five minutes is all it takes to win a game," said Real manager Carlo Ancelotti, whose side remain five points behind Barcelona, who have a three-point lead at the summit.

"The victory was very important because it was a very difficult game.

"It was even more difficult at the end, but we didn't give up and we had the will to fight till the end."

After losing in injury time at Bayer Leverkusen in the Champions League, Rayo Vallecano substitute Jonathan Viera scored an 89th-minute penalty to secure a 1-0 win for his side.