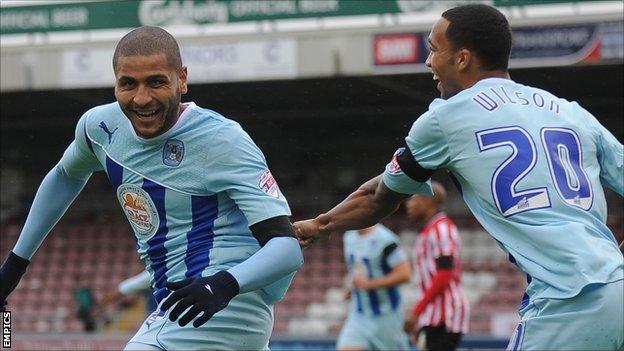 Clarke guided home Blair Adams' deflected cross early on, and Callum Wilson's finish into the top corner put the Sky Blues 2-0 up at the break.

City were in control when Clarke added a third, curling home low inside the box from Franck Moussa's neat lay-off.

However, Lyle Taylor's fierce free-kick and glancing header for the Blades set up a tense finish, but City held out.

Former captain and current under-21 coach Chris Morgan was handed the United reins alongside goalkeeping coach Darren Ward and academy chief Travis Binnion for the trip to Northampton's Sixfields, where opponents City are tenants.

The trio would have been pleased by a second-half fightback when the match seemed lost, although their winless run - now 10 league games - means they are bottom of the League One table after Tranmere's win at Bradford.

From City's perspective the move to Northampton - made by owners SISU - remains unpopular with Coventry supporters who have staged protests outside the ground at 'home' matches.

But their form in such games has been pivotal to their overhauling a 10-point deduction for their holding company being placed in administration.

Four wins from six at their unlikely home have propelled Steven Pressley's side on to 10 points and up to 16th place, a tally that without the deduction would put them among the play-off pack.