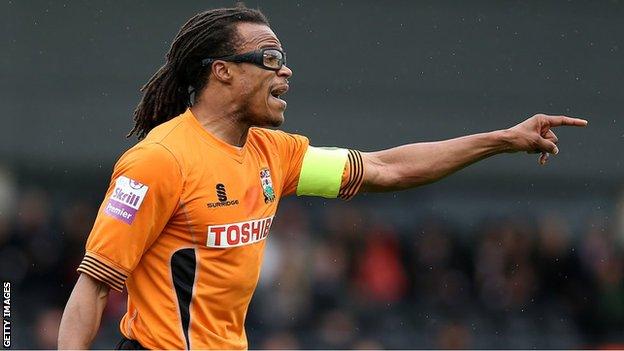 Barnet and Wrexham drew a bad-tempered match that saw three men sent off.

But in the final few minutes Barnet player-manager Edgar Davids, the former Netherlands international, clashed with Wrexham's Stephen Wright in an incident that saw both men shown red cards.

Wrexham skipper Dean Keates equalised from the resulting free-kick, but the Dragons then had Johnny Hunt sent off for a poor tackle on Curtis Weston.

"I don't think there's a bad tackle in the game up to that point [the sending off of Davids and Wright], I thought the game was played fairly.

"It was our free-kick. Wrighty has gone in and tried to get the ball back, there's nothing in it - he's not tried to punch him to get the ball off him or anything like that - and Davids has reacted to it and belted him in the face.

"I think he's a straight red and if Wrighty gets a yellow I'm disappointed, we'll definitely have a look but I think we'll have an appeal there for us.

"Johnny Hunt is probably frustrated, but it's a bad tackle. He's late, he's new to the game and he knows that if he stands up the guy just goes round him and he shields him out or away but you can't do that.

"Our disciplinary record is not good at the minute and we need to curb it and get people that are playing on the pitch for the right reasons."