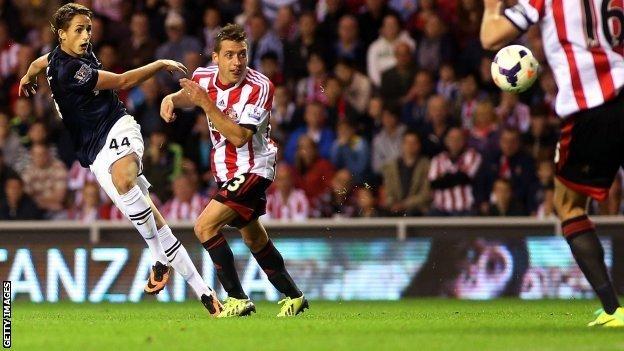 He was the last new name on a Sir Alex Ferguson team sheet at Manchester United and now Adnan Januzaj could be one of the first on his successor's.

Januzaj breathed life into David Moyes' stuttering start as Old Trafford boss with two goals on his full debut as his side came from behind to beat Sunderland 2-1 on Saturday.

While some struggled to pronounce the winger's surname (it is Yan-a-zai) Ferguson knew enough about him to name him as a substitute for his final game in charge, the 5-5 draw against West Brom in May.

The youngster was not used, but it was a sign of recognition for the reserve team's player of the year.

"If Sir Alex puts a young kid on the bench, you know he's got a really good chance. He had been training with the first team, which always tells you he's of the same standard as the lads in the starting 11," former United youth team coach Eric Harrison told BBC Sport.

Januzaj arrived in Manchester in 2011 for a reported fee of nearly £300,000 after six years at Belgian club Anderlecht.

"He is a very gifted footballer and Manchester United noticed that at an early age," said former Belgium goalkeeper Nico Vaesen, who is now a football agent.

"He is well looked after by his father, who took the family over to Manchester with him when Adnan moved to United. It will be his father who has a big say on what country Adnan will end up playing for. "

And that could be quite a dilemma for a player with Albanian and Kosovan parents, who was born in Belgium and now lives in England.

"When he was young, his father always forbade him from going to the national youth teams," said Jean Kinderman, head of youth at Anderlecht.

"He could have played many times for the national under-15s or under-16s but his father focused only on education and Anderlecht."

Januzaj has told of "having the ball at his feet" since the age of five. At Under-12 level he played with youngsters a year older than him.

While he has been given the squad number of 44 at United, he only ever wore the number 10 shirt at Anderlecht.

"He made a big impression - such a talent you don't see every year," Kinderman told BBC Radio 5 live of the first time he saw the youngster play.

"He stood out because of his technical skills, his protection of the ball, the fact that he is always standing up, that he has a fantastic sense of the game.

"He was physically very, very small when we lost him three seasons ago. Now I see a real athlete - when he left here he was a young boy."

With his contract due to run out at end of the season, and reported interest from rivals Manchester City, Januzaj's future is not guaranteed to be at Old Trafford.

But former United player and manager Wilf McGuiness, whose son Paul now coaches the club's Under-18 side, believes he is in the mould of some club greats.

"He's got so much ability, he's got a great attitude too. He can be anything he wants to be. He's that good, he's got that chance" Michael Carrick

"A lot of the young players who come through are a little bit timid and shy, but he looks comfortable and he's confident in his own ability, which you need to be" Wayne Rooney

"Watching Adnan reminds me of when players like Bobby Charlton, Duncan Edwards and Eddie Colman were coming through at United," said McGuiness.

"You just know they have huge quality. I've seen him a lot for the reserves and he's always impressed me with his control, movement and skill. He looks good and if he stays at United he will end up going to the very top. I know everyone at Old Trafford is really pleased with him."

Januzaj, who shares his birthday (5 February) with former United players Cristiano Ronaldo and Carlos Tevez, came to Old Trafford as a 16-year-old, and made a positive early impression.

"When he first came over he was as good as we expected, without doubt," added Harrison who, having helped to nurture David Beckham, Ryan Giggs, Gary Neville and Paul Scholes, is well placed to comment.

"With a talent like that you only have to watch him once to realise. His technical ability is absolutely spot on. All the club needed to do was to see what his fitness was like and that was about it really."

It is less than three months since Januzaj headed his first senior goal in United's 5-2 victory over Kitchee in Hong Kong.

Now, just three weeks after his first Premier League appearance, as a substitute against Crystal Palace on 14 September, his talents are one of football's big talking points.

"The first time I saw him was in a youth game and he was outstanding. Then you get excited and realise he's one for the future," said Harrison.

Italian striker Federico Macheda was 17 when he made his debut against Aston Villa in 2009 and scored a 90th-minute winner. He then scored a late goal the following week at Sunderland.

He has since scored only three goals for United, though. Last season, he failed to net in a 17-game loan spell at Stuttgart and is now on loan at Championship side Doncaster - scoring three goals in his first five games

"Everybody at the club, including the new manager and the first-team players, know that he is definitely one for the future. He's going to be a big asset to the club.

"I wasn't surprised by his debut, I was expecting it - and I think David Moyes was too. If Moyes is watching him in training alongside players like Wayne Rooney and Robin van Persie and he's holding his own then it's a simple equation.

"David won't play him in every game because the pace of the Premier League is frightening. Moyes will nurse him and look after him. He'll put him in, bring him out, put him on the subs' bench etc."

Back in Belgium, where the current national team is blessed with talent such as Vincent Kompany, Christian Benteke and Eden Hazard, there is pride and sadness at Januzaj's new-found status.

"He chose the most difficult project. If he stayed here in Anderlecht he would play today in our first team and it could be a trampoline to Europe," said Kinderman.

"We are proud, of course, but a little disappointed because he left too early."