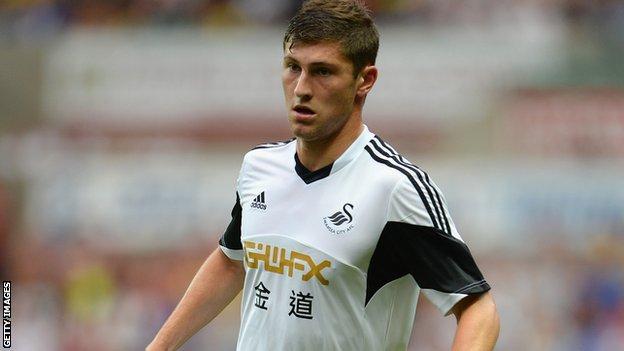 Davies, 20, appears to have suffered a hamstring injury in the 2-0 defeat at Southampton.

Swansea manager Michael Laudrup says Davies will have a scan on Monday on an injury he picked up towards the end of the game at St Mary's Stadium.

"It seems like Ben Davies got injured in the last ten minutes," said Laudrup.

"It's his hamstring and we are hoping it's just a strain, so he will be out for two or three weeks.

He will have a scan and then we will know

"I hope not, but we will see tomorrow. He will miss them (Wales qualifiers) and maybe one or two games for us.

"He will have a scan and then we will know."

Wales host Macedonia on 11 October and then play in Belgium four days later.

The Swans manager saw his side dominate proceedings with Saints keeper Artur Boruc saving brilliantly from Michu while Nathan Dyer struck the post.

Laudrup admitted he was at a loss at how his Swans side had lost top Southampton but did admit they are being punished for any mistake they make.

"We dominated part of the game and the negative part is the loss," said Laudrup

"We have been severely punished lately. Against Arsenal they had four chances and scored two goals. We saw three chance and two goals today.

"At the other end we created but in some games we are not convincing with the last shot or pass. We had the chances we just had to take them.

"We had chances in the first half but dominated the second half. It seemed like they were looking at the watch the whole time and we kept coming at them.

"They were under pressure and every time we lost the ball we got it back.

"We didn't create as much in the second half as we did in the first, but I still expected an equalising goal. It didn't arrive and then they counter-attack and it was 2-0 and game over."