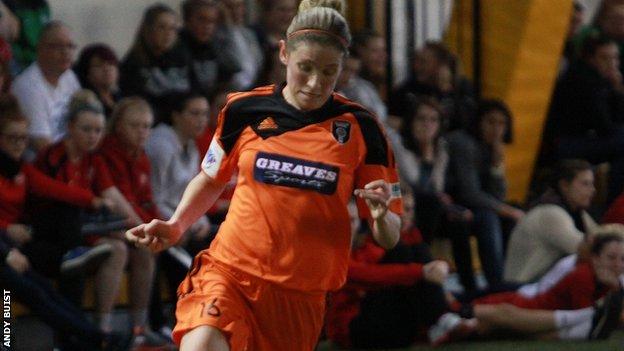 Glasgow City will meet Hibernian in the Scottish Cup final after two tough semi-finals at Ravenscraig.

Hibs triumphed 5-4 on penalties against Rangers in the first semi-final, after Lisa Swanson had cancelled out Rachel Walkingshaw's early strike.

Jo Love, Suzanne Mulvey and Suzanne Lappin all hit the net as Glasgow City saw off Celtic 3-0 later in the day.

The Premier League's top two meet in the 17 November final at Broadwood, in a repeat of the 2011 final.

Hibs were ahead as early as the ninth minute against a Rangers side trailing them by 11 points in the league.

Lisa Swanson's header drew Angie Hind's side level, but Hibs almost sneaked victory right on full-time only to be denied by both the post and the crossbar in a frantic goalmouth scramble.

With neither side able to find a winner in extra time, it came down to penalty kicks. Sophie Riley was the unlucky player to be denied by keeper Shannon Lynn from the spot.

It was mostly one-way in the first half between Glasgow City and Celtic, but champions City only had one goal to show for their dominance at half-time - Love firing a 25-yard effort into the top corner.

City continued to dominate in the second half, but at 1-0 the game was still alive and Celtic passed up a glorious chance on the hour mark when Fiona Brown pounced on a mistake, but she could not find a way past Danica Dalziel.

City got their second goal in the 73rd minute when a great ball from Lappin sent Mulvey through on goal and the City striker shot expertly past the outrushing Gemma Fay into the bottom corner.

The cup holders finished off a fine performance when Lappin netted with minutes remaining after being set up by Ruesha Littlejohn to keep alive their dreams of a second successive treble.