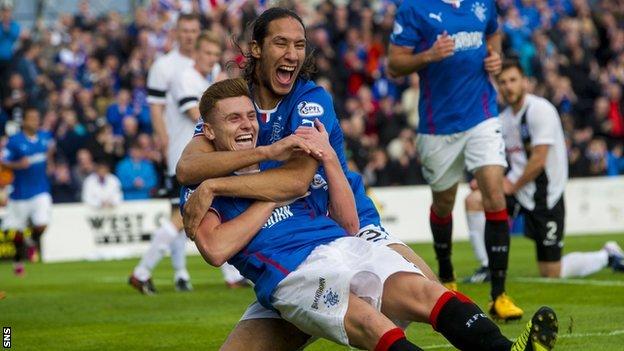 Ally McCoist's men hit two goals in two second-half minutes to take all three points in the League One encounter.

Bilel Mohsni broke the deadlock with a turn and shot in the area, after Ayr had hit the post.

Then Macleod added a sublime second, with the youngster rising to smash home a brilliant goal.

Michael Donald almost gave Ayr a dream start in four minutes in front of the capacity crowd, getting to ex-Ibrox striker Kevin Kyle's cut-back after slack play by Ricky Foster.

His left foot shot spun over Cammy Bell but bounced agonisingly off the post.

Scott McLaughlin was next to test the visitors, hitting a long dipping free-kick which Bell had to push over his bar.

Rangers were dominating possession without looking too dangerous and the busiest Ayr goalkeeper David Hutton had been in the opening 20 minutes was smothering a long-range strike by Lee McCulloch.

As the half wore on the visitors began to see more of the ball, and McCulloch nearly took advantage when Hutton spilled Andrew Little's low free-kick.

At the other end Mohsni was first into the book after a lazy tackle on the edge of his own area, and McLaughin curled in another free-kick which Bell had to push wide.

Jon Daly passed up a golden opportunity to make it 1-0 just before the break. He had managed to nip in front of his marker and had the goal gaping, but the ball appeared to spin off his left foot and went harmlessly wide.

The game was becoming increasingly scrappy, with McCulloch and Kyle in particularly having an intriguing battle for superiority. It seemed inevitable that the opening goal would come from a free-kick.

That came in the 56th minute. Ian Black delivered the ball from the left, Little chested it down, and Mohsni was given the time to turn and hit an unstoppable shot past Hutton.

It was the spark the game needed, and two minutes later Macleod added a real moment of quality to make it 2-0. He sent the ball into the roof of the net with an overhead kick after Arnold Peralta's corner had come off Mohsni into his path.

Lee Wallace could have made it three when he latched on to Nicky Law's ball, but he fired his shot over with just Hutton to beat.

A goal for Ayr would have brought new life into the game but they could not get close in the second half, with Donald's deflected shot late on the best they could offer.