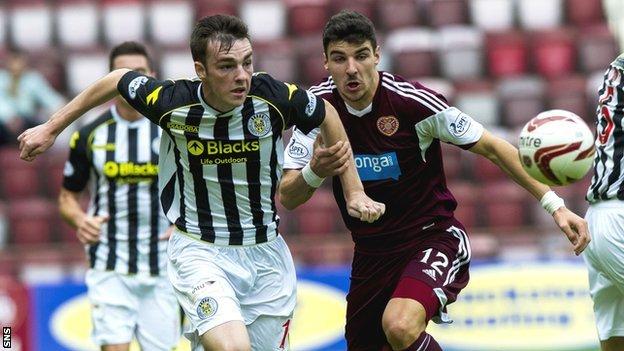 Sean Kelly has become an instant St Mirren hero but insists he is immune to the pressures that have been heaped on manager Danny Lennon.

The left-back's introduction to the Buddies' starting line-up has coincided with two unbeaten games that have gone a long way to saving Lennon's job.

"We have not really talked about it at training," the 20-year-old said after

"I've tried to stay away from it, not reading anything and just tuning out."

St Mirren had travelled to Tynecastle with the prospect of Hearts, who started the season with a 15-point penalty for going into administration, reducing the gap at the bottom of the Premiership to six points.

But the Paisley side headed back along the M8 with a first victory of the season.

I am absolutely delighted for young Sean Kelly, coming through to handle this kind of environment and atmosphere in the manner that he did

"It is only one game and could easily reverse in two weeks' time after the international break, but it's hopefully a start," said Kelly, who had made his first start earlier in the week against Aberdeen.

That draw ended a run of three straight defeats after Lennon changed three of his back four as well as his goalkeeper.

The manager stayed loyal to that unit in Edinburgh, which meant that Kelly retained his place despite the availability of the experienced Danny Grainger after the summer signing's suspension.

"I wasn't too concerned as I thought I had shown on Monday night that I was capable of playing," said Kelly.

"I have been thrown in at the deep end, but I am enjoying it and it's better than sitting on the bench - I wouldn't have it any other way."

Kelly insisted that there had been no panic in the dressing-room despite media speculation about Lennon's future.

"We had the belief in ourselves that we could turn it around," said the product of St Mirren's youth system.

"We just had to stay compact for a game, stay tight and keep a clean sheet."

Kelly was not fazed by playing in front of 15,000, mainly hostile, fans in such a high-profile game.

"When you're young, you dream of playing at places like Tynecastle," he said.

"A couple of my mates are St Mirren fans, so it's a bit surreal.

"But it's just a game of football, at the end of the day, no matter how many fans are there."

Kelly said that playing alongside fellow defenders Darren McGregor and Lee Mair, plus goalkeeper Chris Dilo, in the reserve side had made their introduction to the first-team en masse so much easier.

"I know it's a different level, but at least we aren't strangers," he said.

Lennon suggested that that those players had been spared some of the pressure that had piled on the others.

"I needed to freshen things up in the starting 11 on Monday and I felt it ignited us and gave us a spark to start our season," said the manager.

"I am absolutely delighted for young Sean Kelly, coming through to handle this kind of environment and atmosphere in the manner that he did.

"It's pleasing that we now have two left-backs to compete for that position."