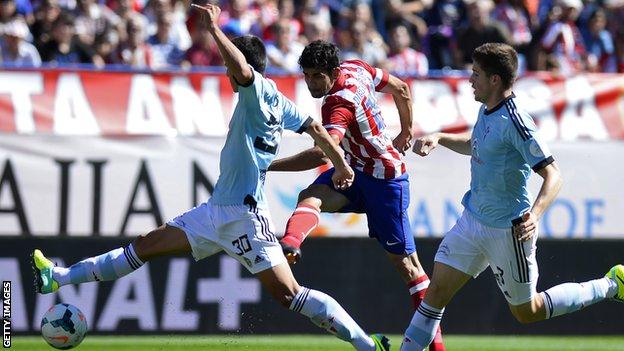 The 24-year-old Brazil-born forward made up for a missed penalty by tapping in Filipe Luis's 43rd-minute cross.

Costa added another in the 62nd minute, his 10th goal in eight league games, before Nolito's consolation.

The win moved Atletico back level on points with Barcelona at the top, five points ahead of Real Madrid.

Costa was the subject of a £21m bid from Liverpool in August but has since extended his contract at the Vicente Calderon until June 2018.

Coach Diego Simeone said: "Costa is our soul. He played a great game. He is constantly growing and can get even better."

Atletico finished third in La Liga last season after an unbeaten nine-match start to the campaign.

And Celta Vigo manager Luis Enrique believes they are genuine contenders for the title.

"It's not for me to talk about them, but they are the most dangerous opponent we have faced so far," he said.

"If they keep playing at this level, it would be silly not to consider them for the title."

Atletico forward David Villa pulled out of the Spain squad for their World Cup qualifiers against Belarus and Georgia after sustaining an ankle injury in the game.

Elsewhere, Valencia were denied a fourth straight league win as they were held to a 1-1 draw at Athletic Bilbao.

Ever Banega gave Miroslav Djukic's side the lead with a first-half penalty, but Mikel Rico equalised with 14 minutes remaining.

Sevilla moved out of the relegation zone by beating local rivals Almeria 2-1 with a stoppage-time winner from Ivan Rakitic.

Kevin Gameiro gave Sevilla an early lead but Rodri levelled midway through the first half.

Sevilla struggled in the second half until Rakitic scored from close range in the second minute of stoppage time to keep Almeria bottom of the table.