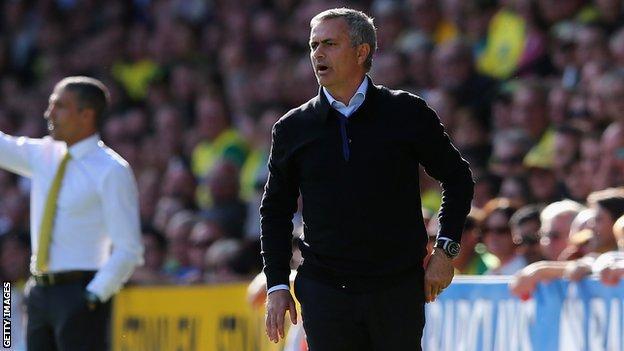 Chelsea manager Jose Mourinho said he was happy that the Blues enter the two-week international break inside the Premier League's top four.

Late goals from Eden Hazard and Willian gave Mourinho's side a 3-1 win at Norwich on Sunday - their first away league win of the season.

Chelsea are third in the table, two points off the top.

"The players go on international duty and it's important we're near the top, where we need to be," said Mourinho.

Prior to winning at Norwich, Chelsea had picked up only two points and scored one goal in their first three Premier League away games.

Chelsea opened the scoring through Oscar and a win seemed as though it would be a formality, such was their dominance in the first half.

But Norwich, urged on by their vocal home support, attacked with more intensity after the break and levelled when Anthony Pilkington headed home.

But Mourinho's decision to bring on Hazard and Willian, in the 75th and 81st minutes respectively, was vindicated.

Hazard stabbed the ball under Norwich keeper John Ruddy to put Chelsea ahead, before Willian wrapped up the win with a curled finish.

"[The win] was important, deserved and difficult," added Mourinho.

"The situation became difficult when it was 1-1 and a point here would have been a bad result for us.

"But the whole team coped well with the pressure and without losing totally the balance we could risk and gamble a bit."

Willian's goal was his first for Chelsea since joining from Russian side Anzhi Makhachkala in August.

"He was injured in the week and the kid made himself available to try to help, and when he came on he gave us a push."