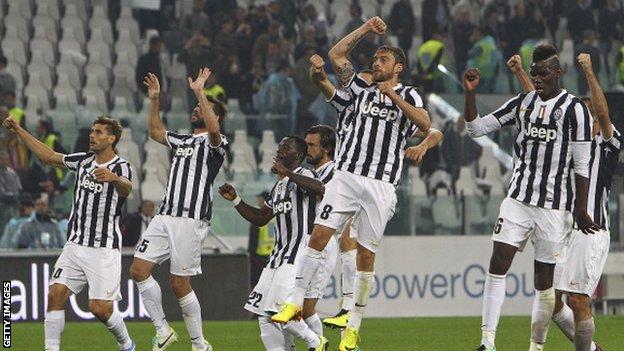 Juventus moved two points behind Serie A leaders Roma after coming from behind to beat 10-man AC Milan 3-2 in Turin, their fourth straight league win.

The reigning champions were stunned when Sulley Muntari fired Milan into the lead after only 19 seconds.

Juventus levelled when Andrea Pirlo scored from a free-kick before Sebastian Giovinco made it 2-1 to Juve.

Giorgio Chiellini added a third after Milan defender Philippe Mexes was sent off before Muntari scored his second.

Top of Serie A

While Juventus head into the international break third in the table, Milan are marooned in the bottom half after two wins in seven matches.

Elsewhere, Rafael Benitez's Napoli side extended their unbeaten start to the season to a seventh game with a 4-0 home win against promoted Livorno.

Goran Pandev finished off a counter attack to put Napoli ahead after three minutes, before Gokhan Inler's long-range shot doubled the advantage.

After the break, Jose Callejon steered in Pandev's pass and Marek Hamsik added a late fourth after another breakaway.

Napoli are also two points behind leaders Roma, who have a 100% record and host Benitez's side in their next outing.

Elsewhere on Sunday, Hellas Verona moved into fifth with a stylish 4-1 victory at Bologna.

Verona, back in the top division for the first time in 11 years, scored through Fabrizio Cacciatore, Juan Manuel Iturbe, former Italy forward Luca Toni and Jorginho.

The start of the match was delayed for 20 minutes because the visiting team's bus was held up by clashes between fans outside the stadium.

Antonio Cassano, another ex-Italy international, scored one goal and set up two more as Parma beat neighbours Sassuolo 3-1 at home.